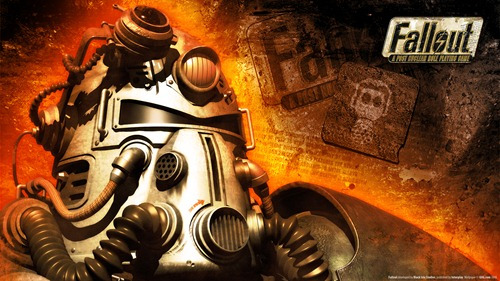 After spending so much time playing with Fallout 3 and all of the current DLC I couldn't help but begin to feel a little bit nostalgic about the original game from 1997. I still remember the original spiral bound instruction manual that came with the game. I remember loading that game up in my old Windows 95 computer (I think it had some sort of AMD chip in it) and playing for a little while before getting killed by radscorpions. I have no idea where that book is now but I do know the CD-ROM for the game is likely to be inside that book.

I never got very far in the original game and it came out the same year I got married so my computer gaming days were somewhat on the way out. I never made it any further than Shady Sands and Vault 15 but I did enjoy the game and the fear of radscorpions has long stuck with me. I still cringe a bit when I encounter those beasts in Fallout 3!

I never played any of the other Fallout games until the latest one arrived on the Xbox360. I often wanted to revisit the world of Fallout and play through the original game but I was never able to locate the disks. That problem has come to an end because only a few short days ago I found a compilation of the first three Fallout games on a DVD-ROM and purchased it.

Returning to Vault 13
Getting back into the swing of the game was very easy. I played through the escape from Vault 13 and the rat tunnel so many times that I still knew where everything was. I didn't even forget to stop by shady sands for a bit of rope before heading on to Vault 15. After acquiring the 10mm SMG in Vault 15 I returned to Shady Sands and, for the first time, I did not get killed by radscorpions along the way! Not only did I not get killed by them but I even took out their lair nearby!

With my Fallout groove on I proceeded to explore the world that I had let pass me by a decade ago. What was I thinking way back then? This game is awesome and has held up very well over the years. I also have to say that if I had played Fallout all the way through I would have been using the hunting rifle in Fallout 3 a lot more often than I used the 10mm SMG.

The DVD Pack
The DVD-ROM pack includes not just Fallout but Fallout 2 and Fallout Tactics for under $20. That is three games (some better than others) for under $20! With that low price in mind I picked it up and was not disappointed.

One thing many old gamers (especially PC gamers) are aware of is the fact that most games need to be patched for bugs found after they are released. The games on this disk are patched and in some cases they are patched again.

For example, the Fallout game comes in three varieties; patched, high-res and community patched. The basic game is the 1.2 version that fixed a good number of bugs from the initial release. The community patched version fixes even more bugs and has a large readme file listing the bugs that were fixed. The high-res version is based on version 1.2 and allows you to run the game at a higher resolution. Considering this game was made to run at 640x480 this high-res version allows you to completely utilize your screen real estate. The DOS version is also on the disk though you should not need to use it.

For Fallout 2 there is a patched and a community patched version. For Tactics you also get an editor. However, since I have not played these two yet I really can't talk about them.

The Test of Time
After spending numerous hours in the original Fallout world I began to think about some of the complaints leveled at Bethesda when Fallout 3 was released. Some said it was just 'Oblivion with guns' while others lamented the change to an FPS style of gameplay.

What I am finding is that Fallout 3 is a worthy successor to the Fallout name. It does capture a lot of the humor and feel of the original game and some things are clearly inspired from the original. Dogmeat anyone?

What I am also seeing is that you can play through the entirety of the Fallout quest in a matter of hours. What I thought would take a long time given the games 120 day allowance for finding the water chip ended up being only a 2+ hour job. The opposite holds true in Fallout 3 because you can't complete the main quests in less than eight hours of constant gaming. That may just be a sign of the times or a case of things going faster once you know where to go.

When I first started playing the game I relied too much on the burst setting of the 10mm SMG and paid the price. Without ammo to feed that beast I was stuck using my knife in hand-to-hand and often getting myself killed. I also found myself nervous in combat because in the original game you don't see the enemy life bar. Think about that, you could have the enemy within an inch of his life and you don't know.

I found a very expensive geiger counter in a shop but I could not afford to buy it. I wish I had because after entering a place that I thought was safe I found myself to be suffering from radiation poisoning. Unlike in Fallout 3 healing chems are not exactly plentiful. Ammo and caps also fall into the 'not plentiful' column which makes each shot very valuable.

After you acquire your first laser weapon you don't simply equip it and shoot it at every hostile you see. That weapon does not come with any spare ammo so you end up holding onto it for those special occasions that you think may need it. In fact you will often find yourself holstering your gun and wading into hand-to-hand with a crowbar to save on ammo!

Conclusion
If you like Fallout 3 or old-style single-player RPG games on the PC then you should investigate getting a copy of this game. It stands up well to other games from its time and though it is not as expansive as modern RPG titles it is still very enjoyable.

There are a few minor graphic issues but they can normally be worked around by setting the game to run in Win98 mode. The most common is where the entire screen turns black and you have to move the pointer around to uncover the screen. I had some other issues on Windows 7 with DOSBox and without. the most common problem is where colors do not match up. This likely some sort of color palette problem.

If you are feeling particularly nostalgic you might want to check out a mirror of the original Fallout website!