Google has long claimed that the one guiding principle it lives by is "Do No Evil". Sadly the Internet giant is becoming a beacon of hypocrisy that shines brighter than the evils of cable companies that sell 'unlimited' Internet access while screwing around with traffic and sending spoofed reset packets.

In order to understand the hypocrisy of Google you must first understand one of the biggest causes Google currently supports: Network Neutrality. The idea behind Network Neutrality is that the companies who own the infrastructure of the internet should not be allowed to modify traffic that flows over their network equipment (no speeding up, slowing down or blocking of packets or web sites) nor should they be allowed to charge web site owners for access to the Internet Service Provider's customers.

Even though Google is not (currently) an ISP they drive a lot of traffic on the Internet. They currently dominate Internet search with over 67% of the search market. With such a large portion of Internet search traffic under their control you might think Google's "Do No Evil" policy and support of the principles behind Network Neutrality would extend to their Internet search business. Oh, wait a minute, NO. Between Page Rank and their search results Google plays hardball with those they do not like.

Text Link Ads is an Internet advertising company that provides a marketplace for webmasters to sell text links on their member's sites. Link buyers are able to search the marketplace and buy links on a large number of sites with rates based on Alexa data and Google Page Rank.

Recently Google de-listed Text Link Ads from their organic search results. Strange isn't it how if you do a search on Google for "text link ads" the only link to them is in the sponsored search section? The only way to get them to show up on a search is for you to search specifically for "text-link-ads.com"

Google will not allow the company to rank for "Text Link Ads" but it is more than willing to take their money and promote their site via AdWords/AdSense! Funny how money has to change hands for a company to show up on a search page for its own name? 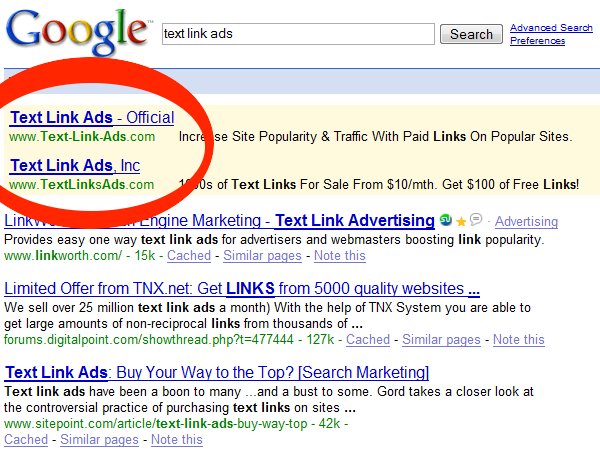 One of the reasons many people believe Google has put Text Link Ads on their hit list is because they feel the service is used to influence Google's SERPs and Page Rank systems. Google can quickly fix part of this issue by removing Page Rank either in full or blocking Page Rank data from being disclosed outside of Google. Google could do this but they will not, Page Rank is too important to Google as it uses it as a carrot and a stick. Do what Google likes and you get Page Rank, make them mad and they take it away.

I have read some arguments about this where the writer points out that it is Google's index and they can do whatever they want with it. This argument is flawed. Though it is Google's index they have a responsibility to their customers to provide relevant search results and removing a site from the index (except for a very specific search term) does not help its customers. Not only that but with such a large amount of the search traffic going through them you might think that they would practice "Search Neutrality" akin to what they want the ISPs to do.

John Chow is an internet mogul who runs a very popular blog about making money online. He does all of the things that Google hates, the least of which is selling text links. For his crimes against Google he has been de-listed much as Text Link Ads has been. Can you believe that a Google search for "John Chow" will not list his site? In fact the top result is a link to a parody site; John Cow. 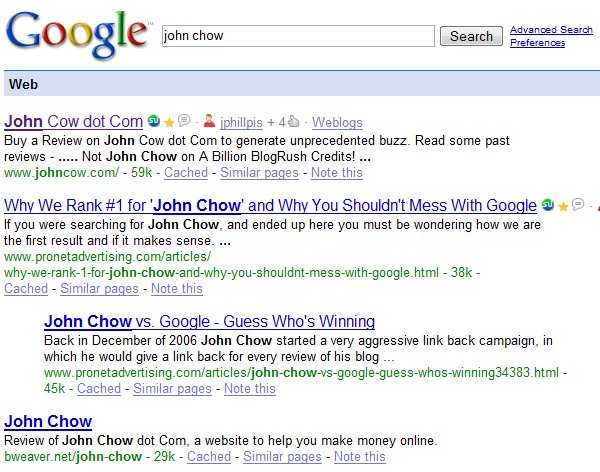 As with Text Link Ads if you search Google for "johnchow.com" you will find the site, but why would you search for that?

John Chow has publicly stated that he does not need Google and his monthly revenue reports and RSS numbers prove it.

It is clear to me that Google has become a hypocrite. On the one hand it fights for Network Neutrality to keep ISPs from adding tolls to the Internet while it feels no such qualms about forcing companies to pay to appear on the search results page for their own name!

Google clearly has a conflict of interest in controlling such a vast amount of Internet search traffic while at the same time basing it's business model on selling advertising links via its AdWords/AdSense programs. It is in Google's short term financial interests to have companies pay for a sponsored search listing rather than allow them to achieve an organic result on the search results page. As for its long term interests, I believe Google is only hurting itself.

More and more people are waking up to the fact that Google is becoming the new evil empire. It does not offer its products and services for free because it likes you, it offers them for free because they are advertising supported and it wants to lock you in to using them. Haven't we heard that argument before about Microsoft software being on school computers?

Once you take the time to look at Google's actions based on their being an advertising company rather than a search company it all begins to make sense. Google does not want anyone selling Page Rank because they feel they own it and only they should be able to profit off of it. That is why they have recently been slapping people around with the Page Rank stick.

It also becomes obvious that Google is doing these slap downs in the hopes of making people think twice about making money via anything other than Adsense. If you sell advertising on your site via any method other than AdSense you are a competitor to Google. Monopolies hate competition and Google is well on its way to becoming the be-all-end-all of Internet advertising. Which is funny considering how they treat their AdSense publishers!

I think it is high time for Google to practice what it preaches and stop using its Internet search dominance as a club to keep its own AdWords/AdSense program on top.