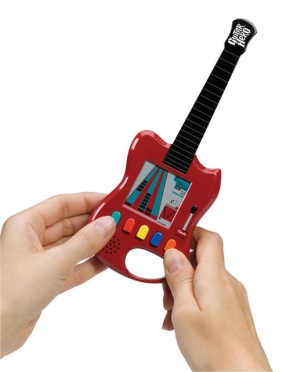 One of the biggest hits of Christmas '07 has to be Guitar Hero III. Today the battle persists between the Guitar Hero franchise and the newcomer Rockband. Guitar Hero just got a leg up in the battle because toy maker Basic Fun will be launching a handheld version of the game at the International Toy Fair, February 17th and 20th at the Javits Center, New York, NY.

I don't know about you but I have never been a fan of these handheld LCD games. I remember playing the sports ones as a kid but I never liked them much. It might have been because my brother always kicked my ass on the football game we had.

No word on song selections but don't expect stereo sound or MP3 riffs coming out of this thing.