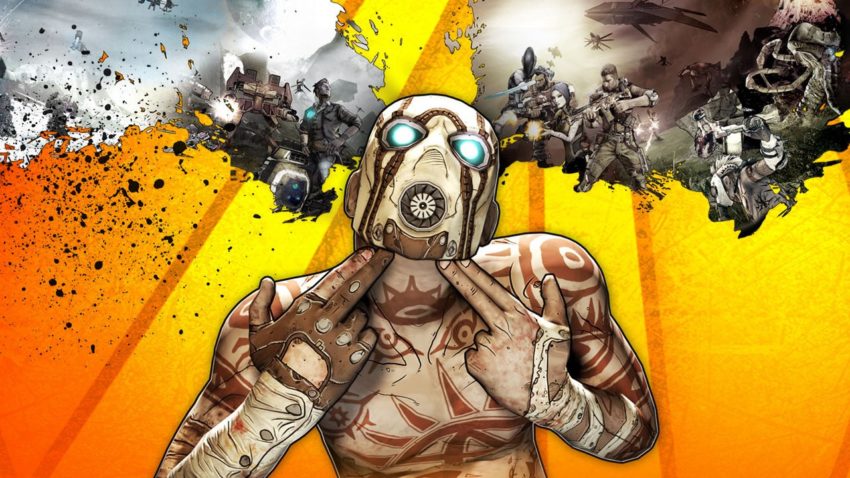 I recently picked up a copy of the game Borderlands for the Xbox 360. When I first heard about this game I was excited. Shortly after reading about the game I began to become skeptical. What at first looked like pure awesome had begun to look like only partial awesome.

Now that I own and have logged several hours into Borderlands I have to say that it is not entirely fair to put this game in the same group as Sacred 2: Fallen Angel. While games have similarities (random loot generation, single and multi-player modes, set classes that are customized as you level up, quests, and weapon mods) they also have a few things that make them different (FPS vs isometric, local split screen versus local shared screen, fantasy vs futuristic wasteland). It is these differences that keep my interest level up.

I admit to being a fan of wasteland games. My love of the Fallout series of games is proof positive of that! As much as I enjoy fantasy games there is just something inherently cooler about shooting a shotgun than shooting a bow. Is it the noise? The way the blood spatters in artistic patterns? The satisfaction of lining up a sniper kill that takes out the guy on the platform mounted autocannon?

You can't talk about Borderlands without bringing up guns. In fact the procedural system used to create new guns on the fly is one of the game's big selling points. To paraphrase Forest Gump, "Borderlands is like an unmarked weapon crate, you never know what you're going to get until you crack it open!"

In the game weapon crates are scattered all over the world. When you first open them they contain a random assortment of randomly generated guns. You might open the crate and find a selection of pistols, shotguns, machine guns, sniper rifles, or any combination thereof.

These weapons even vary in how effective they are. Some are scoped (not just sniper rifles), some have melee bonuses, some bullets that split, some have distinct shot patterns, some have elemental effects that can cause them to set your target on fire, and sometimes they just suck.

You read that part right, sometimes they just suck! I have pulled rare (color coded) weapons out of crates only to find that my common weapon of the same type is better than the rare one. Even worse is when you complete one of the "find the parts to my gun" quests and find out that the gun you get is no where near as good as the one you already have! 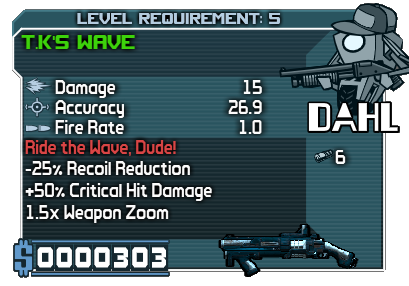 There are also times when you find a gun that is good but only in certain situations. T.K.'s Wave (a shotgun that shoots in a wave pattern) is a good example of this. When it comes to knocking flying critters out of the sky this weapon is great. When it comes to taking down ground based enemies it's not that good. Because it is a rare weapon you don't want to sell it but because you can only hold a small number of items (not weapons but total items) in your backpack you often find yourself selling the rare guns due to space considerations.

A similar problem arises when you find something that is totally kick-ass but you are too low level to use it. Do you keep it? Do you sell it? If the level requirement is more than one or two levels from where you are you have to wonder if keeping it is worth it. You might find something even better an hour from now that you can use and that item is taking up space in your backpack!

Unlike Fallout3 there is a limited amount of ammo you can carry for each weapon. You can purchase ammo upgrades as the game moves along but these are very expensive. The most cost effective thing to do is to hold off on buying the upgrades until you can buy the last one (they do not stack). I don't recommend this approach because even though you are saving money you are also going to find yourself leaving a lot of ammo unclaimed as you explore the world. As a looter myself it causes me pain to leave things on the ground that should be in my pockets! From a game design standpoint it makes sense. I never did understand how my Fallout3 character could carry all that ammo as if it weighed nothing!

The soldier can spawn a small defensive shield with a machine gun (Scorpio) as a class ability. As you level up there are three fields you can put skill point into to customize your character (true for all characters). Because I knew this was going to be a single-player character I avoided the support tree (provides benefits such as healing and rearming allies) and instead focused heavily on the combat skills that allow me to cause more damage with my weapons.

I am currently level 16 and climbing. I have focused mostly on sniper rifles, repeaters, and shotguns. Early on I only kept weapons that included scopes but as my FPS skills improved I moved away from scopes and moved towards weapons with significant bonuses. Currently I use a revolver that is very effective against shields, a sniper rifle that occasionally fires exploding shells, and a vicious shotgun with no special powers other than a very high damage rating and a fast rate of fire. I keep these three weapons equipped at all times and cycle through them as needed.

I\'m no where near completing the game yet (only defeated two bosses) but I'm still having fun. I occasionally find myself outgunned and that is where the ingenious Second Wind part of the game comes into play. If you get gunned down you start to bleed to death. If you manage to kill an enemy while in this state you get a Second Wind (quick health boost and you are no longer dieing) that gets you back on your feet. This has saved my butt many times over the course of the game!

I'll try and provide a more informative review of the game after I get in some multi-player action and complete more quests.