Every party needs a party game, something to bring everyone together and have a good time. You might know this but be unfamiliar with many great party games that are on the market.

Just sit back and relax for a while while I tell you about a few of the great party games that are on the market right now, some you might not have even heard of! 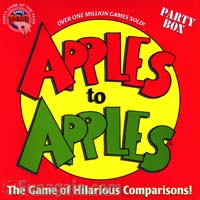 Apples to Apples is one of the best party games on the market. You can read a review of it here. The gameplay is very simple and you can add a large number of players into the game. The way it works is that one player will flip over a green apple card (adjectives) and each player will turn in a red apple card (nouns) that they think best relates to the adjective on the green apple card. The slowest player has to take their card back.

The judge, who played the green apple card, will now decide which red apple best matches the green card played. For example, the green card may be "annoying" and red cards played could have words such as, "children", "crowds", "zebra" or even "my dad". It is up to the judge to decide which card wins that round.

There is a slew of expansions and even sets designed for younger school aged children. You can even create your own cards for added fun! 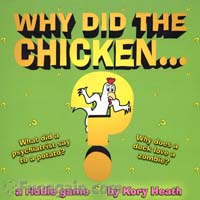 Why did the Chicken is a crazy game that is similar to the ever popular Mad Libs books, you can read a review of it here.

In this game a question card is drawn "What makes (blank) better than (blank)" followed by two noun cards, "wife", "dog house", "skateboard", etc... This gives rise to questions such as, "What makes (a) dog house better than a wife?"

Players must then write down as many answers as they can while a sand timer counts time. After all of the answers are written they are read off and the judge picks the two best ones. Those players, or one player if they had multiple good answers, scores points.

This is a great game to play when you want a fun party atmosphere. Once you get going you may even forget you are playing a game as the laughs just pile up!