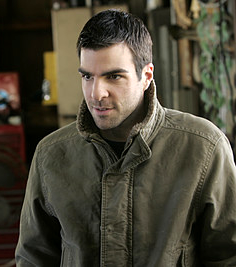 Sylar, the evil boogeyman of the Heroes TV show is a very complex character. Born Gabriel Gray, he is a watchmaker from Queens, New York who always hoped to be "special" but never knew how special he was until he met Chandra Suresh.

It was during his first meeting with Chandra Suresh that he was disapointed to find that he had no special power. Disapointed in his lack of confirmed power he steals the contact information for another "special" person from Chandra Suresh's notes.

When Brian Davis arrives at Gabriel's shop and asks to have his power "fixed" Gabriel kills him. Though we do not know it yet, Sylar removes and eats his brain. Through this process Sylar gains the telekinetic power that Davis had. Sylar then returns to Suresh and shows off his amazing power.

Sylar and Suresh work together for a time until something happens and they break off their relationship. Shortly after this Sylar kills Suresh, setting in motion the events that lead to Suresh's sons trip to New York City to take over where his father left off.

Armed with a list of names Sylar sets off on a country-wide murder spree. Seeking out other "special" people to kill and steal their powers; Sylar becomes a serial killer.

Sylar's current known powers and where they came from:

Sylar may have other powers as well but those powers have not been properly revealed yet. Also, in the episode "Five Years Gone" it was revealed that Sylar had stolen the phasing power from D.L. Hawkins, flight from Nathan Petrelli, regeneration from Claire Bennet and illusion from Candice Wilmer. That future, however, is not set.

After watching "Landslide" last night it apears that Sylar may have killed one other Hero: Claude Rains who has the power of invisibility. I say this because after Sylar talks to agent Audrey Hanson when she captures Ted Sprague he suddenly vanishes. That scene somewhat surprised me because I figured Agent Hanson would have recognized the man she spent so long chasing.

The character of Sylar is intriguing because in the episode "The Hard Part" we find out that he never wanted to be "special" and that it was his mother who constantly pushed him. He has seen his future (being the bomb) and he is suddenly filled with guilt and dread for what he has become. It is at this point that he turns to his mother and asks her to stop pushing him. She replies that she will never stop pushing him because she thinks he is good enough to be President. Little does she know what the future holds in store for her son.

What is also interesting about Sylar is that he is the one main character with powers who has normal parents. All of the other main characters of whom we have met their parents all have parents with some sort of abilities.

Sylar is clearly an evil man. It is quite possible that he could have worked with Suresh in the past in such a way as to not have to kill people to take their powers. Because he draws the power from their DNA it is possible that he may only need a genetic sample to absorb the powers of others. Peter Patrelli is the good to Sylar's evil but, you need to ask yourself a few questions.

The first season is almost over and I have been hearing rumors of a spin-off show being produced that deals with the history of the heroes. I know I am intrigued to find out about the people from the "Linderman Generation" and what happened to split them into two camps. Either way I will be buying the seaon one box set when it is released and watching the season ender episode next Monday.