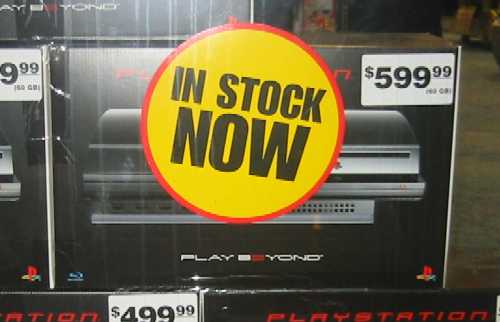 Just the other day I took the family with me to the mall to do some shopping. My wife went looking in the clothing stores and my daughter and I headed out to the game stores!

We expected to find some games for our Wii (when are the good games coming?) and we are still looking for a fourth Wii-mote. We didn't find any Wii-motes in the stores but we found plenty of PS3s!

Wasn't there an article recently in a gaming magazine where the US president of Sony said he would pay money if someone brought him a PS3 or showed him one for sale? I don't want a PS3 but I do want another Wii-mote!

This reminds me of back in late January when we went to see Wicked at the Gershwin Theatre in New York City. We stopped by the Toys "R" Us in Times Square and they had a ton of PS3s behind the register for sale. No Wiis though... We didn't make it to the Pokemon Center store down the street to see if they had any. Besides, I already had mine by then.