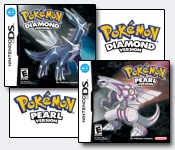 How hot are the new Pokemon games? How about One million copies sold hot?

That's right! The Pokemon games, which were sitting at more than 500K pre-orders have now blown past one million units sold! This has happened in less than a week! This is the fastest sell through of any Pokemon game yet!

Over 5 million copies were sold in Japan after its release back on September 28, 2006. In all, over 155 million copies of Pokemon games have been sold world wide since the franchise began over ten years ago.

In late June of this year Pokemon will also be coming to the Wii with the Pokemon Battle Revolution game. This game will allow you to use the DS as a controller!

If you don't have your Pokemon game yet all I can ask is, "why not?" Pokemon is one of the greatest RPG games ever made and, even once the single player mode is finished there is still a ton of game-play in that little package.

With the addition of the World-Wide Wi-Fi connection service I expect to see Pokemon become even more popular than ever! Sites will be popping up all over the net around this game... Just you wait and watch.

PS: Once I complete the game I will be posting my "friend" code so I can battle all of my faithful readers!