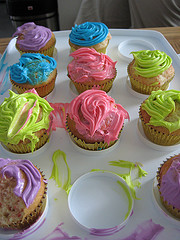 Because I am a father I get to benefit from the holiday known as Father's Day. On this day we honor our fathers. We do this by sending cards and making phone calls. If we live close enough we also drive over and hang out.

My daughter is only 8 yrs old right now so she is always with me. We do a lot of things together as it is so how did she "honor" me this Father's Day?

She did it by making me a card and making me some coupons.

We tried this back on Mother's Day but my wife found herself unable to redeem any of the coupons my daughter and I made for her. My daughter suggested that she redeem them on me!

"How about this one?"
"No, give that one to Daddy, he likes doing that kind of stuff."
"Can I redeem any of these with you?"
"Yeah, this one here says 'take your daughter out for ice cream'!"

You get the picture...

When I saw the coupons in the card I had flashbacks to Mother's Day and my wife's failed attempts at redeeming her coupons. I carefully read each of the coupons I received. Some were one use while others could be redeemed multiple times.

I found a few that made me chuckle and I looked over at my daughter and tried to redeem one.

So I put the coupons away and went back to sleep.

Before you think me lazy all of the above happened before 8:00AM Sunday morning. I was allowed to sleep in until 8:00AM and then I had to get up.

After breakfast (that I made for myself) I sat down to play some Wii. Or should I say I sat down to entertain my daughter who likes watching me play Wii. I put in about an hour on Zelda Twilight Princess and then took a shower.

While I was in the shower my wife and daughter started making cupcakes for me. Cupcakes that my daughter later said were hers and that I could only have a couple of.

My family took me out to eat for dinner at the mall. We did a bit of shopping first and I managed to snag a used game for my PSP (review will come later). My daughter picked up a Neopets magazine and my wife picked out some clothes.

Before I forget, my wife gave me a t-shirt from the Heroes TV show. I can't wait for that show to come back on!

Back to the coupons. On Monday (parents day) I tried to redeem my "read a book to dad" coupon. After much debate and convincing I was only able to redeem it by adding a cupcake to the deal. My daughter spent 5 minutes picking out a book with many questions being asked along the way:

She settled on a book titled "kitten's first full moon". After she read it she crossed off one of the "charges" on my coupon and took her cupcake. She tried to get the cupcake before she read the book but I'm wise to her tricks!

So tell me, how did you spend your Father's Day?