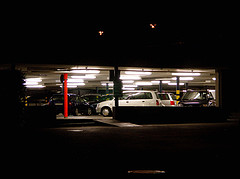 I'm sure everyone remembers the episode of Seinfeld when George Costanza did his best to secure a good parking spot in the city. The problem he ran into was that he could never move his car because then he would lose his great parking space!

Though on-street parking in New York City is cheap, getting and keeping those spaces makes it far more expensive. So, how much would you pay for a parking spot in New York City?

The most expensive spot currently known is located at 2 E 60th St. between Fifth ave and Madison Ave. This space costs $1,183 a month for a regular car. If you drive a more exotic car it will cost you $1,300!

Not all parking in New York City is that expensive, just the good spots. You can get parking in the $400 a month range but those spots may not be where you want to park your car.

Another problem with these parking garages is that they are not the parking garages you see at the mall. Your car does not have a space marked out by white lines. Nope, New York parking garages are more like a can of sardines with all those cars packed as close together as possible so as to be able to squeeze in more cars. This makes it easy to drop your car off but a real pain when you are ready to leave! Before they can give you your car they have to find it and move all of the other cars out of the way.

Some people who live near train stations have even begun to lease out space in their driveway to eager commuters who want to avoid the hefty price of parking in the city. The commuter also gets the security of knowing there car is not packed away in a sardine can of a garage.

Something on the horizon for Manhatten commuters is Mayor Bloomberg's congestion pricing plan. Bloomberg's plan, which would charge cars $8 and trucks $21 to enter Manhattan south of 86th Street during the week from 6 a.m. to 6 p.m., is designed to curb traffic congestion in Manhatten. It may also have the chilling effect of adding $240 to your parking bill every month!

Those in the parking garage business are worred that this will have a drastic effect on their business and they suggest that the city simply raise the meter rates. Even they understand that adding $8 a day to the cost of your commute may be enough to push people onto the rail system.