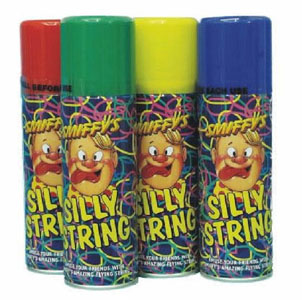 Unless you live under a rock you are probably aware of the current battles being fought in and around Iraq. What you may not be aware of is the role Silly String has played on the battlefield.

One of the dangers soldiers face, when clearing a building, is booby traps that are set off by trip wires.

In most spy-thriller movies the bad guys use lasers and the good guys blow smoke into a room to see the lasers. In the low tech world of real combat those who lay traps use very thin wires. wires that are nearly invisible to the naked eye. These wires are not invisible to Silly String.

To help find these trip wires (without setting them off) soldiers spray openings from up to ten feet away. If the string falls to the ground the doorway is safe. If it hangs in the air then they know there is a problem.

Silly String is not the only battlefield inovation of the 21st century but it is the most colorful.

There are many community groups around the USA that collect cans of Silly String and ship them off to Iraq. Just do a Google search and I'm sure you can find one near you. If you can't find one you can always start your own!

Sending Silly String to iraq is not cheap as it is defined as a haz-mat cargo.