>Ever since I became a Pro member at MyBlogLog I have enjoyed looking at what my readers click on and where they click it from. One of the most useful bits of information is gleaned by seeing what AdSense banners people click on from what articles.

I wrote a few days ago about Google's "10% of clicks are click fraud" in which Google admits that they just blindly discredit 10% of clicks because they assume they are fraudulent rather than take the time to investigate the issue. I feel this is an indicator that Google has no clue about click fraud.

The first picture is taken directly from my AdSense account and only shows clicks, everything else is blacked out. The second shot is from MyBlogLog which shows the two AdSense Adblocks I run on site (now only one).

Notice how the numbers add up nicely? According to both stat tracking systems there were 27 AdSense clicks on my site for September 13, 2007. I can understand if the tracking is off by a little bit due to the fact that some companies may be operating in different timezones but MyBlogLog is now owned by Yahoo and Yahoo and Google are both "West Coast", Pacific Time Zone companies.

So, if the data from PokeFarm is OK why am I complaining? Let's take a look at the same day in regards to my scamstocks site. 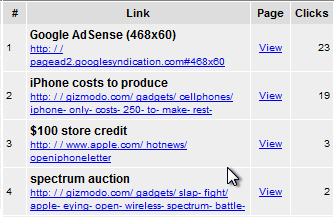 What the heck? Did Google just discount 22 of my clicks? That is a lot more than 10%!

This is not the first time this has happened, I see it almost daily. I have had days where MyBlogLog tells me hmtk.com had 100+ AdSense clicks across multiple articles yet AdSense will tell me I had less than 10.

Because of Google's trouble keeping count of clicks and discounting the majority of my clicks I think it is about time I dropped them entirely. I've been running AdBrite on PokeFarm with some success but I would prefer to just run 30 day button ads (which I run here) for advertisers.

Tell me, am I the only one this is happening to or are their others like me out there? I'm not making a killing off of Google and this summer has been awful! For the first time in a long time I did not make the $100 minimum to get paid from Google. Yes, this has coincided with Google's counting problem.

Update 1
I received the following response from MyBlogLog about click tracking: