After a very long week at Girl Scout Camp I am now back. Not only am I back but I am going to share a picture of my unit.

On Saturday we did setup. This consisted of going into the barn and taking out all of the equipment that was stored last year. I'm talking about everything from tents to coolers. Since my main job was to run the camp store I was in charge of getting the carport tent up to house the store and get the store ready for Sunday's open house.

Getting the carport up would have been a lot easier if I had directions in the box but I did not. Instead I had to figure out what poles went where. That was the easy part. The hard part was getting the sides and top on. They were connected with rubber band things and I was short a few.

Sunday morning I got the store ready for the open house and had some very good sales. In the afternoon we had a torrential downpour and I had to move some boxes off of the ground. The ground in the store never did dry out. Because we did not stay overnight I had to pack up the store every night and unpack it every morning.

Monday was out first real day of day camp and I was quickly sent to the Peter Pan unit. Peter Pan is a unit for the staff kids. Boys under 12 and girls who are not in first grade go here. I had two other unit leaders with me, Pooh and Newbee, as well as three program aides; Glinda, Wicked and Bulls Eye. Because of some trouble on Sunday our camp director (Archie) came down and gave the boys a stern talking to before I got there.

Over the course of the week we went through the various stations including singing tree, craft, program, games and archery. We also had the dreaded "free time" in which we were not scheduled for anything and instead had to find things to do. I'm not one for "busy work" so I dreaded this time of day.

Lucky for me I had two very good PAs (Glinda and Wicked) who showed great initiative during those times to keep the boys occupied. It also helped that I kept them in good spirits by sneaking them extra snacks!

One thing I learned from my army days that worked here is that you always take care of those under you. I made sure to keep my PAs happy and motivated so that they would do the same for the boys. It worked wonderfully. When Archie came around with brownies only for the unit leaders I gave mine to my two good PAs to split. I could have eaten it myself but a good leader always shares the spoils with his lieutenants.

With the exception on one rainy morning and one rainy afternoon the weather at camp held up very well. We had several interesting programs (you can read about them over at Clatter Valley's web site) and the only bad program involved a local Army National Guard parent who volunteered to drive a Hummvee over for the girls to check out. What a mistake that turned out to be. The guy was in full recruiting mode and the kids never even got close to the Humvee. Half way through the guys spiel I felt like calling him out for the weekend warrior that he is but I held back, I did not feel it was my place to speak up and I did not want to cause a scene.

Yes I was in the Army and yes I do consider it a viable career choice but, when you offer a service you deliver the service offered and agreed upon. I can not abide a bait-and-switch.

I did get in trouble once. Archie yelled at me the night of the PA party because myself and five PAs were busy playing Candyman and making too much noise too late at night. I had intended to only teach the game and watch but, when one of the girls left I felt obligated to sit in for her.

There was an overnight event on Friday and I did not sleep over as I had to go home and feed the cats.

When I returned Saturday morning it was breakfast and clean up time. Several of the parents stopped by too thank me for helping their kids have a great time and it was all good. By about 1:30 PM everything was packed away in the barn and I was heading to the bookstore to pick up my copy of the New Harry Potter book, which I have since read!

I will be going again next year and I leave you with this group shot of me with my unit. 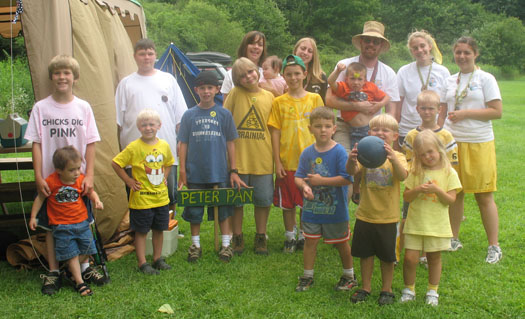