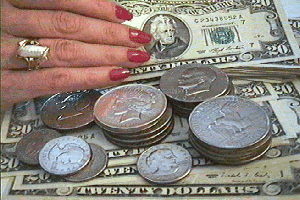 Even when the market is down some investors are able to make money. How do they do it? With “Short Selling.”

Short selling or “shorting” is a way to profit on a security when the price goes down. This works by borrowing a security to sell betting that the value of the security will decrease so that when you have to return it you will be able to purchase it at a lower price, thus generating a profit.

This strategy is not limited to stocks, almost anything can be bought “short” in an attempt to make money in a declining market.

To explain the process of short selling I will break it down into four simple steps:

1) An investor “borrows” shares from their brokerage firm. This is not free and involves not only a commission but also a deposit of cash of 50% of the value of the shares.

2) The investor then sells the shares.

3) At some agreed on time in the future the investor must buy back the shares. If the price drops he makes money, if the price goes up he losses money.

4) The investor returns the shares to the brokerage.

Unlike typical stock market investing, going short requires a somewhat negative outlook on the market. You might see a stock and feel that it is over valued and you want to profit on the correction.

A version of shorting that may be familiar to many people is that which is used near the holidays when a new video game console is about to be released. This most often occurs on eBay when people offer a “pre-order” auction. You are selling something that you do not yet own with the expectation that once it becomes available you will be able to purchase it for far less than what you have already sold it for.

In 2005 there was a very large number of X-Box 360 pre-orders available on eBay prior to the systems release and the prices went well over twice the retail price of the console. This was good for the sellers but a problem occurred when the retail outfits the sellers had arranged pre-orders from failed to acquire enough systems to satisfy their pre-orders! In response to this eBay changed their policy in regards to selling pre-order systems. The change did not occur until 2006 just prior to the launch of the PS3 and Wii consoles.

There is also an important rule to be aware of in the USA and that is that you can not sell a stock short unless it is on an up tick. That is to say that the stock can only be sold if the last trade price was higher than the previous one. This is designed to keep the market from spiraling downward.

Short selling, like all stock transactions, can be very risky. It is probably the most risky in that if the stock price rises high enough you may be unable to meet the commitment of the deal by not being able to afford to buy back the stocks you already sold!

Wally, a stock investor decides to short sell 100 shares of XYZ stock. The stock is selling at $10 per share so he has $1,000 in his account after selling the stock. Suddenly the stock jumps in value to $15 per share! He now has to spend $1,500 to buy back the stock to satisfy the contract upon which he borrowed the stock. If the stock had dipped to $5 per share he would have made $500 on the deal.