The other day I ran into an article on next-gen.biz titled: EDITOR'S VIEW: Used Games are Damaging. This article was also linked to via Kotaku with much commenting. The premise of the article is that a game store that sells used game is killing the industry by depriving the developer of sales. There are numerous problems with this premise and I will endeavor to point them out in the following article.

GameStop has been on a roll as of late. They were the only video game retailer to earn the right to sell Wii "rain checks" just before Christmas. Nintendo (rightly) believed that GameStop, with it's long history of dealing in pre-orders, was the only store able to handle such an offering. The GameStop stock price and profits have gone up 34.7% since last holiday season. Clearly GameStop is doing very well for itself but the question remains, are they doing well based on new sales or used sales? 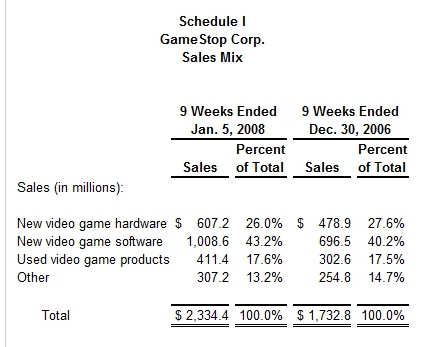 Looking at the financial information for the past two holiday seasons we see something interesting, or not.

As a percentage of sales GameStop's used video game business (all products) has held fairly constant and only gained a tenth of a percentage point. The biggest gainer has been their new video game sales which increased by 3% since last year.

Another thing to remember is that GameStop buys all used video games and consoles you bring in, they turn nothing away. They may only offer you $1 for that copy of Metroid Prime for the Game Cube but that is because they already 50 more used copies in the back room!

Let's take a moment to throw some figures around. Let's say that GameStop pays $25 for a video game that they turn around and sell for $50. If you bring that game back right away (and it is hot) you may get $20 in store credit (less in cash) for that game. At this point in the transaction GameStop is actually losing money as the $25 in profit they received when they sold the game has now been used to buy the game back from you only leaving them with a net profit of $5 on the game. This used game now resells for $45 and from here on out it is all profit, but only if it sells again.

If the used copies never move than GameStop is losing money on each used copy bought back. Every time they flip a used game they do make a good $25 in profit but, how many times can they flip a used game? How many gamers look at the $5 price difference and just buy the new copy?

What about game developers? If your game ends up on the used rack within a few days of the game's release does that not say something about your game?

There are two types of games in the video game industry:


If game developers would create games with long play times and high replayability those games would not be turned back in only days after being purchased.

Think about this, when you go to look at used games are their certain games that you always find there? Do these games have something in common? Perhaps they all suck?

How often do you ever find a copy of Super Smash Bros. in the used rack? What about the Pokemon games for the DS and GBA? Games that have a high replayability factor almost never show up in the used bin.

It's not just used games at GameStop either, what about Gamefly? Their business model is based entirely on renting video games. How many lost sales are created by the simple existence of Gamefly?

Used video game sales are not the problem. They never have been. If developers would focus on creating games that people will not want to trade-in the used market would not be as big as it is.