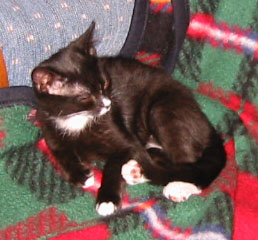 Figaro was a very interesting kitten. We got him from Animal Welfare but we had to wait a few weeks as his litter had pink eye.

Unlike our little "Kiko Sneak-O", Figaro was never very interested in going outside. He did like to sleep in one particular window but, that was as close to the outdoors as he wanted to go.

He was a very playful kitten and loved to sleep in my daughter's room. for some reason he did not like the Byter (our female calico) one bit and refused to sleep near her. He is probably the only kitten we have had that did not enjoy spending time napping with her.

One day, while I was at work, my daughter came out of her room and asked my wife the strangest question. With a very serious expression she looked at her mom and said,

"Mom, do cat's whiskers grow back?"

My wife was at a bit of a loss over this question but, since my daughter likes to read books about cats she thought nothing of it and told her that they do grow back. A little bit later I got a call at work telling me what had happened.

Seems my daughter decided to take her scissors and cut poor little Fig's whiskers off! He looked so sad without his beutiful white whiskers. He has since decided that my daughter is not worth the trouble and he avoids her at all costs.

Eventually Figaro did decide to go outside. When he goes outside he is very skittish. He darts from one bit of cover to the next and does not spend much time out in the open. He also refuses to go in (or out) of any door except the back door. If he sees anyone in the yard he will run and hide, even if it is me!

When he is in the house he also hides from strangers. Sometimes, when company is over, I have to tell everyone to be quiet while I let Fig in through the back door. Once he gets inside and realizes people are there he bolts for the master bedroom and hides under the bed.

Like all kittens he has since grown into a cat. the one fetish he has carried forward from his kitten days is sleeping in lunchboxes. Even though he no longer fits in these things he still tries to! 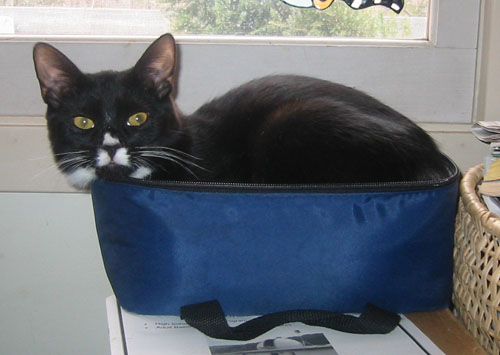