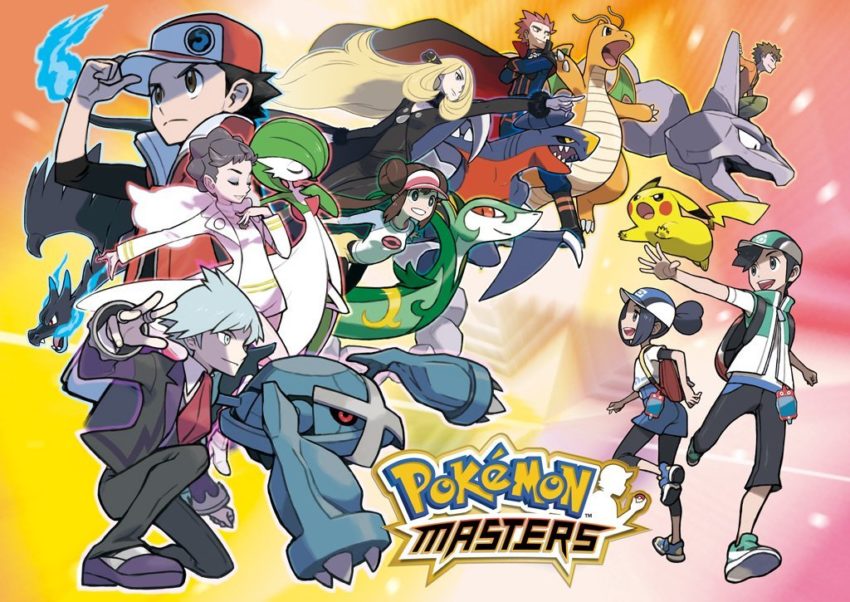 There is a new Pokemon game in town and I'm not talking about the impending release of Pokemon Sword and Pokemon Shield. What I am talking about is Pokemon Masters, a game available on Android and iOS. It is produced by DeNA and the Pokemon Company.

Much like previous spin-off games this one takes a lot from the core franchise and adds in its own special flavoring. The game focuses on 3v3 battles with each available Pokemon tied to what is called a "Sync Pair". These Sync Pairs are just a fancy way of saying a Pokemon Trainer and their Pokemon form a team. At the very start of the game the player makes a few stylistic choices and teams up with a Pikachu. They are quickly joined by series mainstays Brock and Misty. Brock has his Onix while Misty is paired up with Staryu.

The game is broken down into a series of chapters. Each chapter is a mixture of story telling and battles. Along with the story mode exists a training mode. This is a quick way to train your sync pairs and grind upgrade materials.

Each sync pair falls into one of three categories: Strike, Tech, or Support. The upgrade materials for each pair are linked to their type. Thus a Strike pair will need strike materials to be upgraded. When you need resources of the given type all you have to do is grind out a few training rounds.

Every 16 hours challenge courses rotate in and out of the training area. These function the same as the others except the battles are a little bit tougher and the rewards are a bit more plentiful. Each comes with three difficulty stages and each stage can be beaten three times. Word to the wise: The first stage is fairly easy to sweep, the second stage will require sync pairs in the 60-70 level range, and the the third tier will require sync teams that are nearly maxed out.

Sync Pairs range from three to five stars, which is a measure of their quality. A pairs star level can be increased but it is a long process. As a general rule the more stars a pair has the better they are at the same level and the higher their level cap increases. For example, a three star pair is capped at level 30, a five star caps at level 40. Once you unlock the ability to raise level caps each increase adds 15 levels to the cap. Thus a 3 star will require five level upgrades and a five star will require only four.

When you first acquire a Sync Pair it will be low in level and only have two moves. Once again you will have to grind out some materials to add the remaining two moves and a passive skill. Passive skills are analogous to a Pokemon's ability from the core game. Some Pokemon can choose from multiple passive skills.

One of the areas where Pokemon Masters departs strongly from the core game is the way it handles types and resistances. Unlike in the core game where every Grass Pokemon is weak to fire or Electric attacks are useless against Ground Pokemon, Pokemon Masters assigns each sync pair one weakness and no pair is immune to any attack type.

Another difference you will encounter (and it can be frustrating) is that when you play the story mode the AI opponent's Sync Move hits ALL of your Pokemon while yours only hits the one you have targeted. What this means from a strategic view is that you want to knock out the main enemy Pokemon BEFORE it can use its Sync Move. Luckily only the central Pokemon can use it but, I have had too many battles where that one Sync Moves wipes my entire team.

I am not going to go much deeper than this. The game has special training events and a co-op mode (friends and matchmaking) as well as some in-app purchases using gems as currency. Strangely enough the game give you gems for playing so I don't see a need to buy them at all. The gems are only useful for loot box style Sync Pair purchasing and you get enough Sync Pairs joining you from just playing the game. To add to the strangeness the game has friend codes but it also allows you to quickly send friend requests to trainers you get matched up in co-op mode!

For a Free-To-Play mobile game it is rather engaging. It doesn't follow the core game rules to the letter but it is fun. It doesn't even feel very grindy until you want to buy the final level cap upgrade. If you like Pokemon and you want something more fast paced than Pokemon Go! on your phone then you should try it!