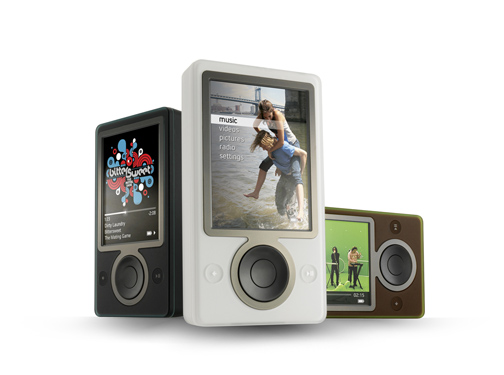 This weekend I happened to encounter a Zune display at an OfficeMax store. Curious I tried it out...

Let me say this first, the Zune is no iPod. OK, I just wanted to get that out of the way.

The Screen:
The larger screen on the Zune is nice. The colors look good and there is some eye candy thrown in with the graphical interface. Unlike the iPod which has a very basic "function over form" type of interface.

The Size:
The Zune is big. Real big when compared to an iPod. Easily twice as thick but without the slimming rounded corners that iPods have.

The Zune is big in a "clunky" sort of way rather than a "manly" way.

Usability:
The Zune has a "wheel" with a button in the middle (similar to the iPod) and two extra buttons, one to either side of the wheel.

Now, before you think it's the iPod with two bonus buttons know this: the "wheel" is just a round four-way control switch. You can not circle your finger on it as you do on the iPod. You have to press it in one of the four cardinal directions to maneuver through the menu system.

I found using this broken wheel to be annoying and not a all a nice time.

Wi-Fi:
The Zune's Wi-Fi was thought to be the item that gave it the edge over the iPod, it didn't.

When they slapped on the annoying 3/3 DRM scheme on any music files you try to "share" they put the first nail in Zune's coffin.

The second nail comes from the fact that you can not use that Wi-Fi in any other way! You can not connect to anything but another Zune!


Wow, iTunes does not require that much power! Notice the lack of Vista support? Not just Vista, what about Mac and Linux/Unix?

Though I can not confirm it first hand, I have heard that the Zune also requires IE7 and will not work with anything other than IE7.

Earlier I thought that once the Wi-Fi was cracked to allow for sharing of songs without DRM added the Zune would kill the iPod. Now that I have seen and touched a Zune I take it back.

The Zune does not have the cool factor or the fun factor or even the usabilty factor going for it. It's a clunky piece of hardware where the one "killer app" they added to it has been so shackled as to make it worthless.