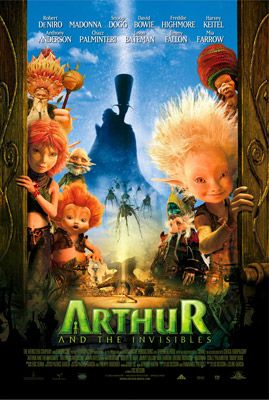 The new movie "Arthur and the Invisibles" is now in theaters. I took the opportunity to take my 7 yr old daughter to see the movie with me. We went to a Sunday showing that was very low in attendance. In fact, including us, there were only 11 people in the theater! I asked one of the other parents and they mumbled something about a football game.

The movie clocks in at a mere 1:34 and has good pacing throughout. The voice cast works well even if some of the choices appear to be type cast (David Bowie as the evil nemesis character reminds me of Labyrinth). 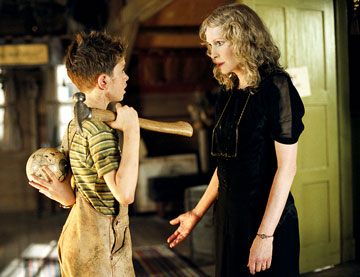 The movie opens with Arthur (Freddie Highmore) and his grandmother (Mia Farrow) enjoying a wonderful day in 1950's Connecticut. We soon find out that it is young Arthur's tenth birthday and his parents are in the city (New York?) and can't make it home to see him. We also find out that his grandfather vanished a few years back while on an expedition. Arthur makes a wish after blowing out his candles and goes to bed.

At this point in the story we know: