This weekend my family and I went to the movies. I wanted to see I am Legend but I was out voted. Instead we saw the new Disney movie Enchanted.

Enchanted is a new spin on the fairy tale story of the evil queen not wanting to lose her throne. Her stepson Edward, the prince (James Marsden), has been kept away from girls his whole life by the Queen's (Susan Sarandon) special henchman Nathaniel (Timothy Spall).

The movie opens with the prince wrangling a troll while Giselle (Amy Adams) sings in her home. Hearing the catchy tune the prince rides his horse to find her. At the same time Nathanial lets the troll loose to thwart him. After a quick action scene Prince Edward and Giselle meet up and complete their duet. finding that they are a perfect match they plan to be wed the very same day.

On her way to the wedding Giselle is taken aside by the queen and sent into the "real" world, where she spends a very rough first day before meeting up with Robert (Patrick Dempsey) and his daughter (Rachel Covey). She spends the night on his couch and awakens the next morning to perform a "working song" that attracts the local city wildlife to help her clean the apartment. 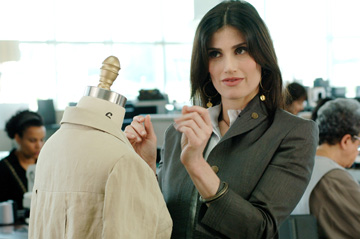 When Robert's long-time girlfriend Nancy Tremaine (Idina Menzel) shows up she just happens to walk in on Giselle, fresh from the shower, falling onto Robert in the hallway. A small fight ensues and Nancy leaves.

Robert takes Giselle with him to work (in an attempt to find a way to send her on her way) where she interferes in his job, as a divorce attorney.

Around this time Prince Edward and a talking chipmunk named (not Alvin, Simon or Theodore) Pip make the journey to the real world in an attempt to rescue Giselle. Nathaniel soon follows at the bequest of the queen. 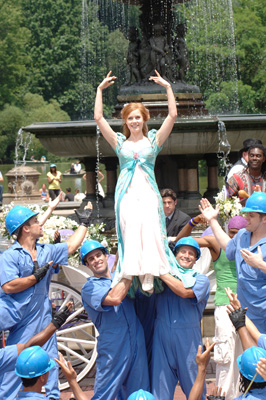 Robert and Giselle make their way through the city park where, wonder of wonders, Giselle's singing turns into a song and dance routine that goes from one end of the park to the other. Prince Edward hears her singing but gets run down by a group of cyclists and misses her. Nathaniel catches up with him and helps him go somewhere to recover.

Eventually Prince Edward does find Giselle, in Robert's apartment no less. Unlike the Prince, who is still an empty headed fairy tale character, Giselle has grown and requests that they go on a "date" before returning to their homes and getting married. The date culminates at the royal ball being held in our world. Robert and Nancy are also at the ball and Nancy is obviously perturbed when Giselle and Prince Edward show up.

Due to Nathaniel's continued failings the queen herself shows up to take care of matters in her own special way. Let's just say that the movie ends with two weddings, two book deals and a funeral.

The movie was entertaining enough and fit for family viewing but I do find it very interesting that the character of Robert was so instrumental in removing the innocence of Giselle. When you step back and look at the movie you begin to realize that the only adult in the fantasy world is the queen while Prince Edward and Giselle are nothing more than innocent children. I put the ending of the movie on the same "disturbance level" as having Madonna play the part of the love interest for a ten year old boy as was done in the movie Arthur and the Invisibles. On the surface it looks sweet and innocent but when you pull back the curtain you are left with something that would result in a lengthy prison term if it happened in real life.