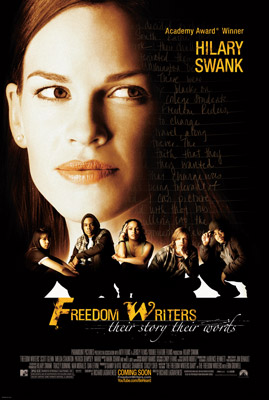 Freedom Writers is a non-fiction movie about a teacher who inspires her at-risk students to greatness. The Netflix

jacket has a little bit more information on it but that is all that you need to know now.

Starring Hilary Swank as Erin Gruwell this movie is set in the inner city. Gruwell is a new teacher full of hopes and dreams about teaching who, after the first day on the job, begins to wonder just what she has gotten herself into. Faced with a multi-ethnic gang ridden class and a host of unsupportive teachers and staff members she tries the best she can to teach.

See, it turns out that many on staff are angry about the forced integration that has come to their school. One faculty member laments that 75% of their top students have chosen to go to other schools after the inner city kids were bussed in. Gruwell refuses to give up hope.

In fact after being rebuffed in her attempts to get books and supplies for her kids she takes on part time jobs so that she can afford to buy materials for her kids herself. At one point she buys every kid in her class a new paperback book for them to read. the kids are impressed and you can hear them muttering about how they were given new books and not the usual crappy books they typically receive.

However, as Gruwell's school life improves her home life deteriorates. After only one and a half years as a teacher her husband leaves her. He can't take being the 'wife' in the marriage and tells her so. At the same time her father finally comes around and tells her how much he respects the work she is doing.

I did not grow up in the streets. in fact I grew up in mostly white bread suburban areas south of Boston. The most inner city I ever lived through while growing up was where the turf battles were between kids whose hair colors ranged from blonde to red. It was not until I joined the military that I came to have a good number of friends who did not already look like me.

Erin Gruwell put a lot on the line to make her kids care about learning and graduating from high school. She treated her kids with respect and they, over time, returned that respect.

Freedom Writers is not a short movie, it clocks in at over 2 hours in length. It is, however, a very good movie. it portrays the life of a teenager in a very realistic manner. Most of the film takes place in the classroom but what happens in that classroom is very moving.

Rent this one if you can.