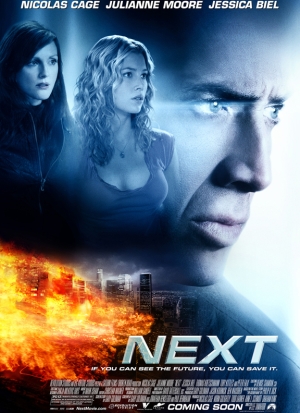 I just finished watching this one (Thank you Netflix

The movie is based on the Philip K. Dick story The Golden Man in which a golden skinned mutant has the power to see every possible outcome of every possible action he does. Think of it as the computer Deep Blue living inside a person. The movie is not an adaptation of that story but a new story based on the ideas of the original story. Once you understand that you will better be able to enjoy the film.

The basic plot for the film is that agent Ferris is working on a case that involves a nuclear bomb being smuggled into the USA via a certain California port city. She has also been watching Johnson for a while and she thinks he has the power to see into the future. She surmises that if she had him around he could tell them where the bomb is. Though she does say some heavy handed things about the good of the many outweighing the freedom of the one she tends to be more talk than action on those thoughts.

The movie begins with Johnson doing one of his shows and then going to a nearby casino to earn some extra money using his special "two minute into the future" sight. While in the casino we are treated to the casino security forces talking about him and wondering how he is cheating. Johnson's voice narrates as he explains that he always keeps his winnings low in an attempt to avoid detection. Clearly this idea is not working as the casino security team is about ready to take him in for questioning when his spider senses warn him.

While trying to cash out his chips he catches a glimpse of a crime that is about to result in two casino workers getting shot. He intervenes and the chase is on. The next few minutes, as he evades capture in the casino, is a great indicator of just how useful being able to see two minutes into the future can be. I do not want to spoil how he gets out but it is just amazing to watch.

Johnson has a few run-ins with Ferris but he always does it during his future sights. By doing so he is able to learn what she wants without having to actually meet her. It is just prior to one such encounter, while he is playing pool with Peter Falk's character that we learn that he has gotten a vision of a girl he is supposed to meet at a diner. He knows the time of day but not if it is AM or PM so he goes there, twice a day, everyday, in an attempt to meet her. 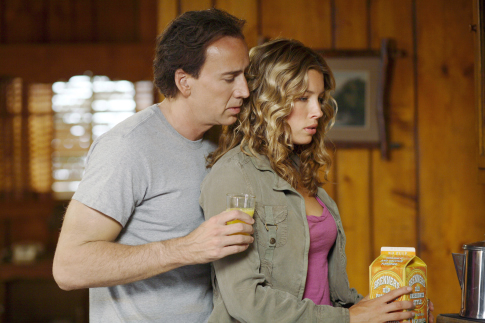 When she eventually does show up he pulls a bit that reminds me of the movie Groundhog Day where he keeps trying different approaches until he hits on what that works. They hit it off and head to Flagstaff together. No, they never make it that far.

It is about this time that the movie turns into an action flick as the people who have the nuke also want Johnson as they see him as a potential threat to their plan. I do not want to spoil the rest of the movie so all I will say is WOW!

Nicolas Cage is a great action star because he does it in such a nonchalant way. He does it in that, "what, you mean this is not normal?" way he did the National Treasure movies. Couple this with Jessica Biel (I did not realize it was her until much later) who pulled off a great job acting like a young woman with a real head on her shoulders, and you have some great chemistry between the two.

The movie is short, clocking in at a mere 96 minutes, but it is also very good. If you like "low key" action movies i suggest you check this one out.

Funny thing is that I used to look at Nicolas Cage movies as if they were crap but now I am finding that there is a certain something about the movies he makes that makes them very enjoyable.