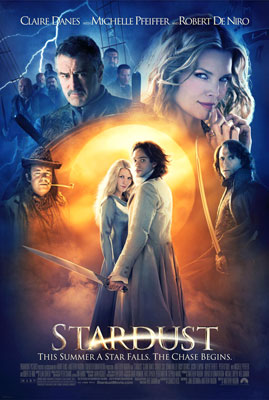 >When this movie came in the mail (Netflix.com

) I had no idea what to expect. All I knew was that it was over two hours long. My wife picked it out in part because of the big name actors (Robert De Niro and Michelle Pfeiffer) in the cast. tonight we watched it.

Deep in the countryside of England there lies a small town named Wall. It gets its name from a mysterious (and magical) wall that borders the village. On the other side of this wall is the magical kingdom of Stormhold. It is by order of the town council that none are allowed to pass over the one breach in the wall. A guard is forever stationed at the breach to insure none cross over.

One evening Dunstan Thorn takes it upon himself to trick the guard and pass over the breach in the wall. Thinking nothing special lies on the other side of the wall he is amazed to discover a magical land, and a girl. After a fun night young Dunstan returns to his side of the wall with naught but memories.

Nine months later a small package is left at the wall for him. It is a basket with young Tristan Thorn inside. It seems his mother is unable to keep and raise him on account of her being the slave of a witch. Dunstan takes it upon himself to raise his son, alone. 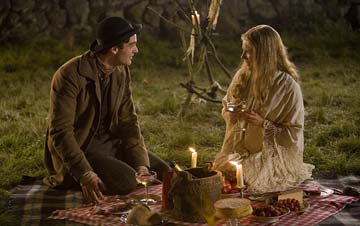 Flash forward 18 years and we find young Tristan on the verge of becoming a man. He pines for the love of the village beauty Victoria (Sienna Miller). Being but a lowly shop boy he knows he has little chance with her. A chance made even smaller by the appearance of her prime suitor Humphrey (Henry Cavill). Determined to win her hand in marriage (if not her heart) he takes her out for a secret dinner 10 days before her birthday. While they talk a shooting star falls and he tells her that he will find the fallen star and give it to her in exchange for her hand in marriage. If he fails she will marry Humphrey, who is off to Ipswich to buy her a ring.

Unbeknownst to Tristan the star has fallen because the previous king (Peter O'Toole) of Stormhold has died and set in motion a series of events that will both determine the new ruler of Stormhold and make Tristan into a man, or have him die trying.

The funny thing about the royal family of Stormhold is that only one male heir can become king so all of the male heirs take it in turn to kill off all of their male siblings. In fact, Just before the king dies Septimus (Mark Strong) pushed one of his brothers off a balcony to his death. Once dead the ghosts of the brothers sort of hang out together until the next king is crowned. These apparitions act as a sort of peanut gallery trough out the movie as they can neither be seen nor heard by the living. Let me say right now that the lines the ghosts are given are classic. At times I find them saying aloud thoughts that are in my head.

What the king has done is set the ruby of Stormhold out into the stars. The next king of Stormhold will be the one who returns the ruby to it's normal form, a task that only a male member of the royal bloodline can do. Somehow the king has also managed to bring a star to Earth who lands in a crater alongside the ruby. Somewhat bewildered she picks it up and wears it. 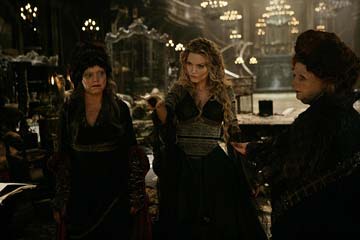 It is at this time that we also find out about the witches, the head witch, Lamia (Michelle Pfeiffer), and her two sisters plan to kill the star and eat her heart to attain youth and power once more. They did this 400 years ago when the last star fell to Earth. After drawing straws (so to speak) Lamia is warded the task of bringing the star home and is rewarded with the last bit of the last star. A morsel that rejuvenates her frail old body. Using magic has its own price as it ages her rapidly. There is one very humorous scene where she attempts some magic to fix her aging appearance and the end result is that her youthful breasts suddenly droop.

Now we have three people looking for the star or the ruby she wears. Tristan wants the star to prove his love to Victoria. Septimus and his brothers want the ruby so that they may become king. The witches want the heart of the star to regain their lost power.

The movie is an amazing ride and a joy to watch. I do not wish to spoil anything but I will tell you this. Tristan's mother is the long lost royal daughter. It's not much of a spoiler as it comes out early in the movie.