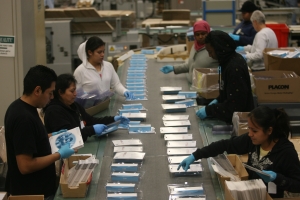 Employees at Nintendo's distribution center in North Bend, Wash., prepare thousands of boxes of Wii for shipment to retailers across the country. Nintendo has tripled its distribution workforce to meet consumer demand for the holidays. Nintendo's current production run is 1.8 million Wii systems a month, almost twice what was produced at launch last year. Nintendo set all-time U.S. sales records in November 2007 for both its Wii and Nintendo DS systems. Both systems remain the hottest gifts for the holidays because they have games and software that appeal to every member of the family.

Nintendo has its elves in full force for the holiday season and they still can not make enough Wii's to satisfy demand. Just yesterday I visited a brand new GameStop store that had just opened and they sold their stock of Wii's (new and used) in about 10 minutes of opening. they had everything else aplenty but no Wii's. No Link's Crossbow Training either. They did have a few of the Tri-Force DS's in stock.