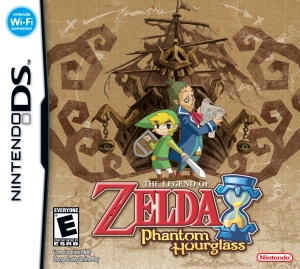 Nintendo celebrates the release of The Legend of ZeldaÂ®: Phantom Hourglassâ„¢ with an action-packed launch party at the Nintendo WorldÂ® store in Rockefeller Plaza. Video game lovers of all ages will line up for an early look at the latest ZeldaÂ® game and a chance to win exciting prizes. Fans will have their picture taken with the game's hero, Link; dress as their favorite Zelda characters for a costume contest; show off their Zelda knowledge in trivia quizzes; and be among the first to play Phantom Hourglass in a live multi-player tournament. From 2 - 4 p.m., attendees will have a chance to purchase the highly anticipated title the day before its official release.

The Legend of Zelda: Phantom Hourglass for Nintendo DSâ„¢ makes its formal debut on October 1, breaking the mold for first-person adventure games with a revolutionary stylus-only control scheme and a wireless two-player mode. Phantom Hourglass features eye-popping 3-D graphics and fun challenges for casual gamers and Zelda fans alike. Since 1987, the Legend of Zelda franchise has sold more than 52 million units worldwide, making it one of the most popular game series in the industry.

The big party will be held at the Nintendo World Store at 10 Rockefeller Plaza in New York City. On Sunday, Sept. 30 between the hours of 1:00PM and 4:00PM. The game will be available for purchase after 2:00PM and the costume contest runs from 3:00PM to 4:00PM.

If you are going to be in the New York area on Sunday why not check it out?