Once again Nintendo has managed to keep the Wii and DS in the top two spots of the video game console food chain. According to the NPD Group Nintendo sold over 8.5 million DS units (4 million in November/December alone) and nearly 6.3 million Wii units (2.3 million in the final two months) in 2007. This puts the DS in the top spot in the Wii at number two.

"By the end of 2007 we were sold out of virtually all hardware, and much of our stock of software and accessories was sold out as well, thanks to the broad appeal of Wii and Nintendo DS to core gamers, women, families, grandparents, and seemingly everyone in between and that momentum continues here in the early weeks of 2008," said Cammie Dunaway, Nintendo of America's executive vice president of sales & marketing.

Some additional facts about Nintendo's 2007 performance in the United States (note: All figures are from NPD):

No matter how you slice it 2007 has been a banner year for Nintendo. The Wii has been on the market for over a year now and you still can not find one in stores! The off color DS Lites are in a similar boat. I managed to acquire one of the Golden Zelda themed models but I have not seen one of them in stores all season.

The one thing that worries me is that the success of the Wii appears to not be translating into third party games. The biggest hits on the Wii were all Nintendo games or well established franchises (Guitar Hero III). I don't know if this is simply a case of third party developers not getting on board soon enough or those same developers being scared of a repeat of the Game Cube. 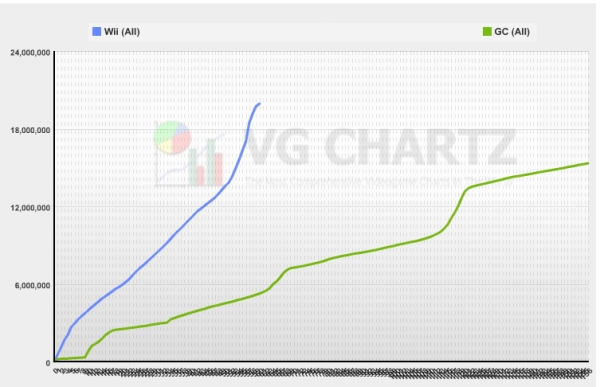 Now, when I say that they are scared of a repeat of the Game Cube I'm not talking about sales of the console because, clearly that is not the case. The Wii has already outsold the Game Cube in lifetime sales. What I am talking about is the common knowledge that the games that sell best on Nintendo platforms are always Nintendo properties. I don't see this as a fault of Nintendo though. Look at it this way, what other console maker makes as many games for its own systems other than Nintendo?

Other game developers can find success on the Wii, they just have to be more creative and look at the Wii as something more than just an Xbox with wacky controllers. Take a look at one of the best third party launch titles for the Wii; Rayman Raving Rabidds

Rayman Raving Rabbids has sold a very respectable 1.2 million copies since launch. Metroid Prime 3: Corruption has only sold 1.08 million copies since its more recent launch a few months back. When you compare those numbers to both the number of Wiis sold worldwide (19.94 million) and then look at how many copies of Call of Duty 4: Modern Warfare sold for the Xbox360 (3.21 million) after being released in November and you begin to understand the problem as developers see it.

You might have just read the above paragraph and thought that the Wii has a higher attachment rate but the attachment rate is not based on one game but all games. This is also where things get a bit tricky as most hard data on video game sales is based on titles sold in stores. both the Wii and the Xbox360 have built-in stores where you can buy games right on the console without having to go to a store. Hard numbers for those sales are hard to come by. So, it is quite possible that many wii owners, rather than buy new games, are spending their money on virtual console titles. This is a mixed bag for Nintendo, on the one hand VC titles are pure profit but, on the other hand developers look for sales of games in stores as an indicator of whether or not a console is worth developing for.

The Wii itself has huge market penetration factor working in its favor, the DS doubly so. Nintendo also recently released their list of games coming up in 2008 and it is a long one. I do not think the Wii has run out of steam yet!