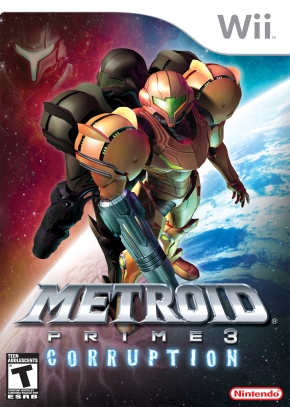 Imagine my surprise this morning when I found the front of my Wii glowing blue. That is the signal that you have mail waiting. So, what did this mail tell me? It told me that there was something new in the Wii shop for me to download for free, something to do with Metroid Prime 3!

Yes indeed, Nintendo is making the Wii better and better by adding a preview option for new games. If only it was a playable demo! I guess we will have to wait until Nintendo allows us to plug in a USB hard drive for that though.

It's about time Nintendo starting offering content such as game trailer previews to the Wii. What better way to advertise a new game than by putting a preview channel right on the Wii? The only problem I had was that the preview trailers were somewhat jerky at times due to connection problems. See, the trailers are not downloaded to the Wii but are instead being streamed.

Either way I'll be getting this game when it comes out! That and a bottle of motion sickness meds.