The Witcher was one of those games I paid attention to during its development. Dope graphics, mature storyline, innovative combat system? Color me SOLD! I waited for that game to come out with mucho anticipation. I thought for sure that this game was going to be the roleplaying game of all roleplaying games. Unfortunately, what I got was ridiculous loading times, stiff dialog, and a combat system that was pretty much: click swing-swing click swing-swing click swing-swing. The game was pretty and the adventure itself was still fun, but the game needed some polishing, something I thought the patches would do. They didn't. Eventually The Witcher started to collect dust in my hard drive.

Fast forward to now. CDProjekt has released The Witcher: Enhanced Edition. "Oooooh," says I. I didn't even know this was coming out until I received my review copy. "Enhanced," says I, "what does this mean?" (I really talk like that sometimes. My mother should have aborted me, I swear.) The outside of the box claims the following:

What the fuck? Man, this box sucks. Where's the 'enhanced' stuff? Ooooooh here we go. Inside the little game flap. I throw the game case over my shoulder and start reading the inner flap of the game box itself. Aha! Here we go, now we're talkin'!

Alright, so let's install this thing and...
OH WAIT. I forgot to add that the game comes with the adventure editor D'Jinni. The mod crews will love that should it deliver.

Moving on. So I installed the game and played through quite a bit of it. Some of the claims they make on the box are buh-huh-ullshit. Others are spot on, while a few are kinda fixed, but not enough to warrant claiming they're fixed in the Enhanced Edition of The Witcher. And honestly, some changes rocked my pants in a surprising way. So let's get to business and get this review rolling, eh? Keep in mind that this isn't a review of the Witcher itself. You can find legions of those of the internet. No, this review is to see if the claims they make on the new box are true, to see if the Enhanced Edition is worth it, especially if a person already owns the original version (like I do), and to see how this new content adds up.

...well, I played the game in it's 'enhanced state'. Here's the pre-verdict, all sorta bullet-pointed for you freaks. Because I know you love bullet points. First things first; the inside flap of the box's claims, the ones I was giddy over:

I shall break my awesome bullet pointing to point out that thus far the review seems pretty negative. But it gets better. Really, it does. 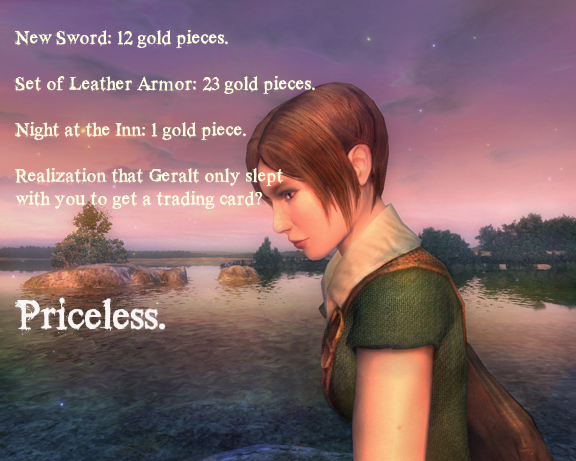 Now for things not on the box that I notice were also fixed or something like that:

Other stuff (sorry, no bullet points):

The game comes with a pretty sweet map of the world the game takes place in. For you tabletop RPG geeks (such as myself), now you have a map for the setting so you can run a Witcher roleplaying game using your favorite system. Score. Also included is a game walk-through booklet and a story written by the dude that does the comic, Andrzej Sapkowski (my spell check just freaked out), complete with pretty cool color artwork. I can't tell you if the story is any good since I haven't read it yet, but it's the guy that writes the comic for frig's sake, the creator of the entire franchise. I'm going to go out on a limb here and say that at worst it's decent stuff.

I almost hit the floor when I saw that the game came with four disks considering that the game itself is a DVD disk. I was like, "Holy shit! How much new content is there!?! Silly Grim. It turns out that the game is still one disk, but it comes with a "behind the scenes" DVD that was pretty cool to watch, the game's soundtrack (Oooooooh, roleplaying music), and a disk of music that inspired the game. Okay, apparently the last one is the music the people that made the game listened to when they were programming or whatever. I already own the bands I liked on the list and the rest of it kinda sucked. But I'm a total music snob so ignore my little rant here about the music. You'll probably like most of it. 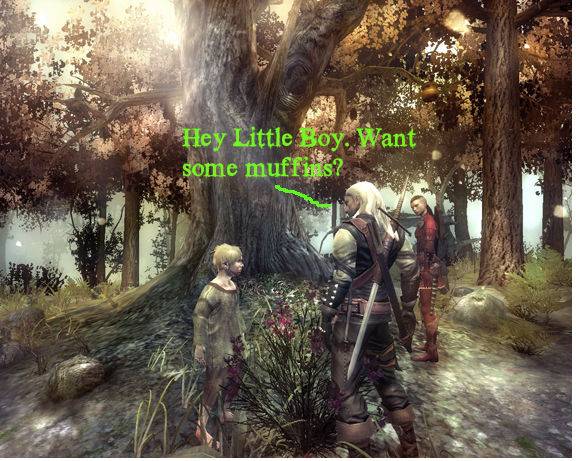 The verdict? Well, if you already own the Witcher this might not be worth your money all over again. Even with the loading times being better and the slightly improved combat, you already dropped $40-$60 bucks on this game once, so doing so again is... well, you know. Unless these things they've fixed really, really bothered you to the point that you couldn't play the original and/or the music disks, maps, and other extras really appeal to you. Or find some sucker on one of the internet classified sites to buy the old one for $20 so that purchasing the same content (albeit improved) all over again doesn't hurt as much. Certain aspects of the game are most certainly cleaned up, but it's still the same Witcher you nabbed before... oh wait, you do get the two new adventures that are separate games. Uh. Yay? I dunno. I wasn't impressed by them.

Final Verdict (Finally... oooh, pun! I think...): you probably want this game, since I don't know anyone who owns the Witcher that was content with it. Most of the shit they fixed in the Enhanced Edition are things these very people bitched about, so chances are they'll rebuy the game to play headache free. Sure some things aren't fixed in my humble yet awesome opinion, and other things irked me (like the editor), but overall the game is a much better, saner, and pleasant experience.