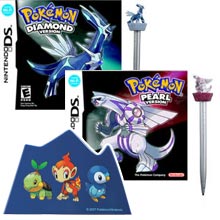 This morning I took my daughter down to the local GameStop store to buy our pre-ordered copies of Pokemon Diamond and Pokemon Pearl. All I can say is wow! These games are far better than I was expecting.

We had gotten the call a few days prior from GameStop telling us our games would be ready for a 9:00AM pickup... Well, something happened at the local store and they did not open until 10:00AM. Let me tell you, that was a long hour to wait!

Since we were first in line it was a simple in and out for us. We got our two styluses and the stylus holder. they were offering the big guide book for 20% off but, I want this game to be fun and full of surprises so those books are off limits until we beat the game.

See, that is one of the best things about getting a new pokemon game, the wonder. Yeah, I know now what types some of the new beasties are but, when you first encounter a new pokemon you have to guess its type until you actually catch one. That's the fun part for me. It's not about beating the pokemon it's all about meeting them and facing the unknown!

After about seven hours of playing this game (I got Pearl) I have now beaten two gyms. My pokemon are near level 20 and I'm having a great time!

I went with Chimchar as my starter and my daughter took Piplup. One of her friends took Turtwig so, eventually, we will all have one of each starter.

Interestingly enough, within a half hour of play time my daughter managed to catch her first shiny pokemon ever, a Shinx! She was so excited she started calling her friends. I was excited for her as well because I know how rare it is to get a shiny pokemon.

For the main gameplay areas you do not need your stylus. In fact, even when I need to use the touch pad for something I just use my finger or the control pad. Most everything can be done with the control pad. I find it faster and easier that way.

Not messing around with the old GBA link cables is awesome!

The Wi-Fi section is also awesome! It's about time they added a world-wide connection center for the pokemon games.

I've just started dabbling in the underground areas so I do not have a strong opinion about that area yet. I'll let you know more as I know more.

One big difference that I am finding is the lower EXP payout from most encounters. My speed record for beating Pokemon Ruby is about 12 hours. Within six hours my pokemon (in Ruby) were already well past level 26, not so in Pearl. I'm just not getting the EXP payout like before. Not sure if there are simply less trainer battles or what...

If you are a pokemon fan you should already have these games!

I'm going to be posting some more Diamond and Pearl articles in the near future so stay tuned!!!