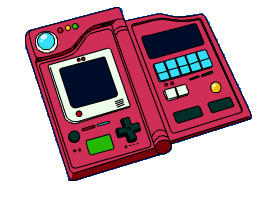 In 1996 Game Freak started a world-wide phenomenom when it released Pokemon Red and Green version for the Nintendo Gameboy. With the game finding instant success in Japan it was soon internationalized as Pokemon Red and Blue. This set of games spawned a franchise that would endure for decades and expand into card games, books, TV, movies, and more.

The first generation games (as they were later known) included a cast of 150 Pokemon. (151 when you add in the mysterious Mew, a Pokemon even Nintendo was originally unaware of!) Each game had a small subset of Pokemon that were 'version exclusive'. The only way to get these Pokemon was to trade with a friend over a link cable.

The game opens with the player receiving their first Pokemon from Professor Oak. Players pick from three potential Pokemon:

Battling with Pokemon uses an expanded 'rock, paper, scissors' system. With the starters Grass beats Water, Water beats Fire, and Fire beats Grass. Naturally the game gives you a rival who takes the Pokemon yours is weak against! There are numerous Pokemon typings and some Pokemon have two types. More typings were added in later games and Psychic Pokemon were pretty much the power picks of Gen One as they were only weak against Bug Pokemon, which no one used seriously.

Aside from trying to 'Catch Them All', the players main goal was to collect eight gym badges from various towns across the Kanto region which would then culminate in taking on the Elite Four and becoming the Kanto Champion. All games in the main series follow this basic system though their have been some changes in the more recent and spin-off games.

I freely admit that I did not begin my Pokemon journey with the first generation. My first excursion into this world was with Pokemon Ruby, which is a Gen Three game. However, I did find a copy of Pokemon Yellow (the Pikachu version) and played through to completion. I also played through their GBA remakes: Fire Red and Leaf Green.

This November Pokemon Sword and Shield will be released. Two games that are set in the new Galar region and represent the new eighth generation. Unlike previous games there will not be a complete National Dex available once you become the champion. This controversy has become known as "Dexit" and has been widely discussed.