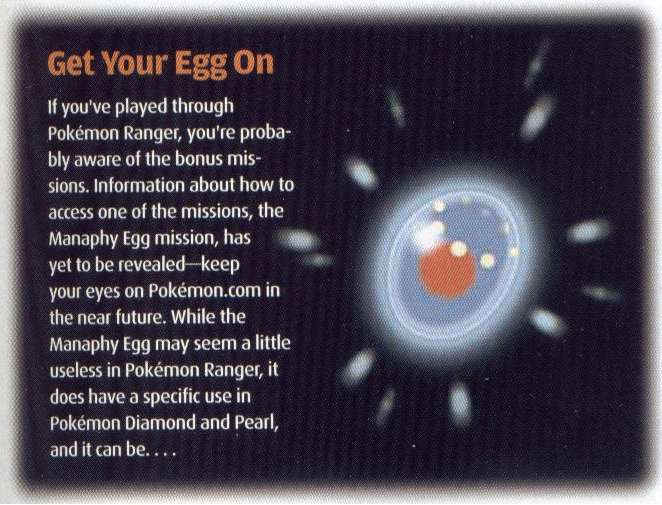 The Feb 2007 issue of Nintendo Power magazine mentions a special Egg you can get in Pokemon Ranger. An egg that has a use in... Pokemon Diamond and Pearl!

Get your egg on

If you've played through Pokemon Ranger, you're probably aware of the bonus missions. Information about how to access one of the missions, the Manaphy Egg mission, has yet to be revealed - keep your eyes on Pokemon.com in the near future. While the Manaphy Egg may seem a little useless in Pokemon Ranger, it does have a specific use in Pokemon diamond and Pearl, and it can be...

Nintendo Power also states that diamond and Pearl will use the "dual slot" feature to transfer Pokemon from the GBA games and that you will be able to link up with Pokemon Ranger to access more special content! 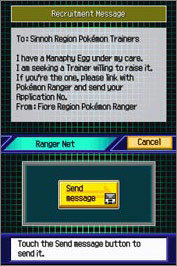 The newest Pokemon to make a splash is Manaphy, star of the upcoming movie, Pokemon Ranger and the Temple of the Sea, which is scheduled for release this spring! We don't have a lot of information about Manaphy just yet, but we can tell you this - you won't be able to get it by just playing through Pokemon Diamond and Pearl!

Check back later this month for more details on the Manaphy Egg mission, including the secret code needed to unlock the special Manaphy mission!

When the code comes out I will publish it here.

This mission will be available in the English version by inputting a password in the password mode of Ranger Net. The password mode is acquired by pressing R, X and left on the D-pad at the same time on the Ranger Net screen.

pokemon.com is now reporting that the Manaphy code will be revealed on Jan 20, 2007. the following information is also provided:

1) You must have successfully completed Pokemon Ranger to the very end of story mode. After the story mode is over, the game will save, and from the main menu you will see a new option - Ranger Net.

2) Ranger Net is where you enter the code, which is an alphanumeric code that we will reveal in pieces until the final code reveal on January 20th, 2007.

3) You have to complete the three extra missions that will have you face off against Deoxys, Celebi and Mew. Check this website for tips on completing the Deoxys and Mew missions. Celebi is to easy to require tips.

UPDATE 3
For those who thought they could be clever and simply change the clock on their PC... The timer may count down to Zero, and it will say "Manaphy has hatched!" but, you still will not get the code!

For those in the UK who have been coming here and wondering why the code does not work: