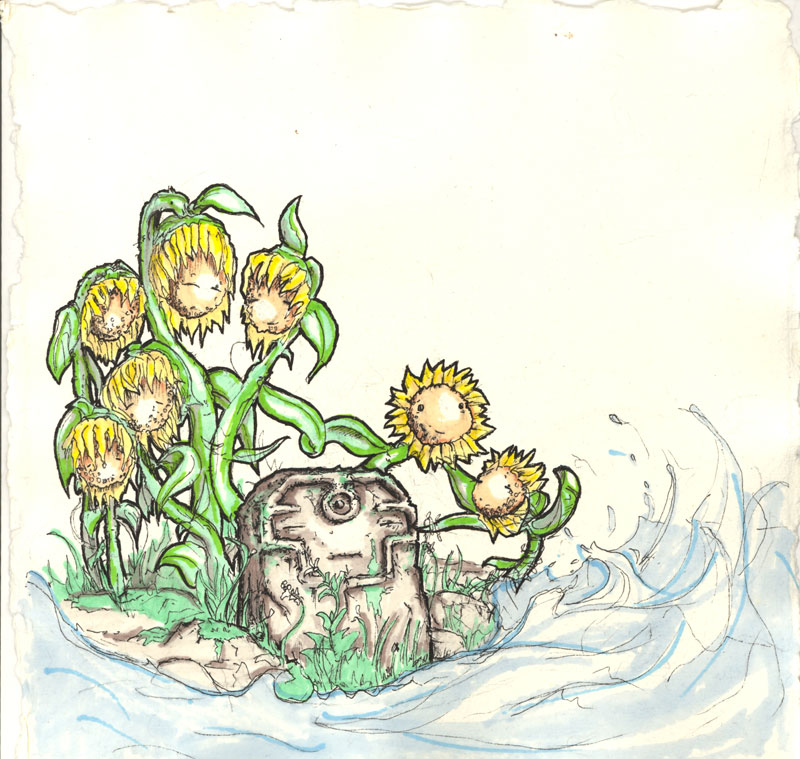 Sunflora is an interesting Pokemon. They are well known for their love of sunlight and water. While they are typically seen to be a fun and loving Pokemon there are always exceptions to every group.

In my travels I have unearthed numerous accounts of these creatures. Some have been passed down through word of mouth while others were written down and hidden away in the corners of old mansions and museums. One of these accounts I will share with you...

It was with great trepidation that we approached the remains of the ancient village. There were numerous rockfalls and areas of quicksand along the trail that had been pointed out to us. Unfortunately our hired guides refused to guide us past the fallen obelisk. In hindsight, we should have followed their advice.

It was along that trail that we suffered our first casualty, Hansel. While traversing a particularly rough portion of the trail Hansel reached out to grab onto a tree limb to steady himself. The tree limb turned out to be some sort of poisonous Pokemon, snakelike in appearance. Before any of us could assist him he was already on the ground, writing in agony. Laraby tried to at least recover his body but a series of vines shot out from the undergrowth and pulled him in.

After a short pause the four of us that remained agreed to increase our guard and persevere onward. Whether this was born of courage, greed or fear is up to history to decide.

Several hours after we lost Hansel we came into sight of the village. It was still several hours distant and night was falling. We made our camp under a small rocky outcrop. It was a good defensible spot and nothing bothered us during the night.

The next morning we awoke to the most amazing scene. The rising sun was reflecting on a veritable city made of gold! Peeking through the green overgrowth was an an expansive amount of gold. We were all very jubilant, could we have really found El Dorado? Our guides had told us that the golden city was cursed but a city made of gold? No curse can be that strong as to keep us away!

It took us many hours of hiking through the dense jungle before we finally reached the city proper and something was clearly amiss for there was no gold to be found. With the sun already setting we explored what little we could with our lanterns and torches but between the broken stones and the dense jungle foliage we thought it best to wait until morning.

Our thoughts were in turmoil. Did we make a wrong turn? Did we end up in a different section of the ruined city? Our questions would have to wait until morning. Finding the remains of a building that looked to be in pretty good condition we again setup camp.

I woke up early the next morning, as I am often want to do. Feeling somewhat restless I grabbed a lantern and my sketchpad and proceeded to explore the ruins. I made sure to let Nigel know where I was going and set out. If I had known that it would be our last conversation I think I might have said more to him.

I found a fairly clear area in part of the village. It looked like it might have once been a location for commerce for there were the remains of a well in the center. I climbed atop some large stones and proceeded to make myself comfortable, all the while waiting for the sun to rise and the glint of gold to tell me if we were indeed in the right place.

As I watched the sun rise I was taken aback by its beauty. As I looked around me for glints of gold I soon discovered the source of our error. The glint of gold lay behind but not in front of me. Because it was not gold but the faces and petals of thousands of feral Sunflora. They did not spy me upon my raised perch but I can not say the same for my comrades, gentle folk that they were.

I can only imagine the shock on their faces when the camp was overrun by the marauding Pokemon. As I crawled upon my vantage point and looked towards camp I saw them. Hundreds of them. They were singing the sweetest of music as they attacked the camp. Seeds flew look bullets. The sun seemed to grow brighter. I was growing sleepy from their singing but I held on.

I wept as I saw seeds take root around the sleeping form of Gabe. He had been lulled to sleep by the singing of the creatures and now they were leaching the life out of him.

It was at this point that I hurriedly penned this account of our tragedy. Upon its completion I will release my Pidgey from his containment vessel and task him to return to base camp. I will leave it up to my associates there whether or not to risk a follow up expedition to retrieve our remains.

Yours in good faith,

I found that account in the back of a museum library. I asked the curator for any details and he informed me that a rescue expedition did indeed take place. Alerted to the presence of the feral Pokemon the rescue party was able to go in with greater numbers and the proper support Pokemon.

However the Sunflora were simply too numerous and far too powerful during the daylight hours. No one in the rescue party was severely injured but all hands from the original party were lost.

So it is that I must inform the reader that not all the glitters is gold and not all Pokemon want to be your friend.

Prints of the Sunflora artwork can be purchased here. The print is available in a variety of framed options as well as on a tote or pillow.