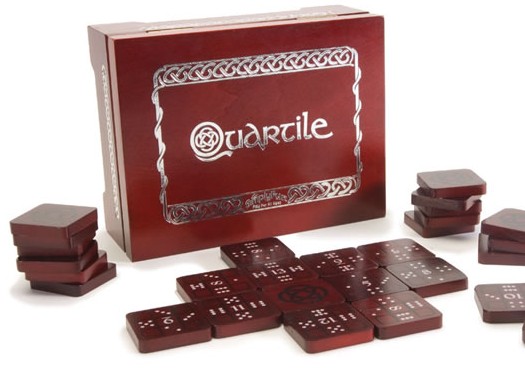 It has been a long time coming but I an now proud to announce the release of my new game, Quartile.

The original prototype of this game began under the name of "Quads" but was soon changed to "Quadrovex" after I found several other games already using the name Quads. Before final production was complete the game earned its third, and final, name: Quartile.

The first prototype was built from wood. I took a 2x2 and used a miter saw to cut it into little tiles. I then used a sharpie to mark up those tiles and test the game out. After getting the design down the way I liked it I moved on to marble. Yes, I said marble.

Using marble tile from a tile store I was able to create some very beautiful prototypes to show around to publishers. Several publishers were interested in the game but only Simply Fun offered me a good deal. Before signing with Simply Fun I had already built 50 stone prototype sets, each with its own wooden box.

Why am I telling all of you this? Well aside from the fact that I would love for you to buy this game I am also offering up a contest of sorts.

If you would like to win one of my stone prototypes you can do one of the following:

The contest will end on September 15, 2007 so you have plenty of time.

I only have a few marble copies left and once they are gone no more will ever be made. I sold some of the stone copies for $60, you can win one for free.

There are a few differences between the two versions:

How to Play
There is a short flash video on the Simply Fun website that tells you how to play the game but I will give you the brief version here:

This game is great for teaching basic math skills as well as spatial thinking and planning ahead skills. I know you will enjoy it just as much as I do.

Grim from grimjesta.com was one of my early testers. Check out his Quartile story here.