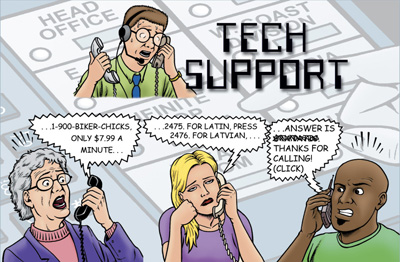 Talk about surprises, when I checked my mail today I saw something that I was not expecting, a royalty check!

You might be wondering why I received a royalty check in the mail today and I'm going to take a few moments to tell you why. It all started a few years ago when I developed a card game...

I had wanted to be a professional game designer for a long time and one day I sat down and decided to make it happen. I developed a clever little card game named Tech Support that mixes bluffing, hand manipulation and humor. I themed the game on the somewhat comedic nature of a tech support call center.

Thus Tech Support was born! The next step was a little bit more difficult, I had to sell the game to a publisher. Lucky or me I had been building some in roads with Kenzer & Company and I showed it to them.

A few days later I got the word from Dave Kenzer that they wanted it. A few short contract negotiations later and we had a deal.

Within a years time the game was on the market and selling well. There were some people who purchased the game and did not like it but, most people liked it after a quick demonstration.

The main problem people had was that they were not playing it as a social, or beer and pretzels, game. Tech Support shines brightest over a couple of drinks and conversation. It is not the sort of game you play with winning as your main goal.

Which brings me back to what I now hold in my hands, a royalty check. The game sold well over the second half of last year so they sent me a royalty check. It's a little bit of extra money that I can use to take my wife out to dinner!

If you want to pick up a copy of the game for yourself you can go to Funagain Games or Kenzer & Company.