I have been getting a lot of questions from my readers about the status of the PokeFarm site. No, I'm not going to move the content back here! All I can say is that September was an awesome month for the Farm and October is looking to be even better! 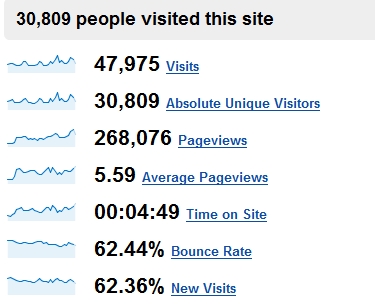 As you can see from the Google Analytics screen cap on the right PokeFarm is doing extremely well. So well that I expect to break 300K page views in October.

Part of the reason the site is doing so well is the great content but the part that keeps coming back is the farming. For that I owe a debt of gratitude to the farmers who help me on site. I would much prefer to reward them with a share of the sites income but the site currently has no income.

The Pokemon content used to bring in a good bit of money but after AdSense stopped paying me for clicks I dumped them. I have been dabbling in some affiliate programs but i have not yet found the perfect match for the site. (Hint to any Internet advertising mavens, I've got a lot of page views I would like to monetize!)

Because the Pokemon games have recently been released in Europe i have seen a large upswing in European traffic. Even with the time difference we have been able to pull off many international trades.

My next project for the site is to create an online Pokedex. Somewhere in the middle I plan to hold my first local "meet and greet" event where I intend to give out some rare Pokemon.

As you can clearly see from the chart snippet at left the lions share of the traffic comes from the USA with a strong following building up in the UK and Ireland. With an average time on site of almost five minutes you can clearly see that the people who visit like the site and like the content. I had to close down the comments on some of the older articles because they were approaching 1K comments and rendering those pages was slowing things down.

On a more serious note I am interested in monetizing this site so if an advertising person wants to earn a commission I'm all ears.