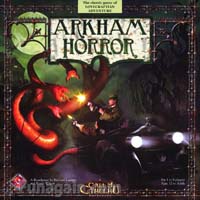 Every other Monday I get together with my friends for game night. This week it was only Dan and I so we took the opportunity to play Arkham Horror with the Curse of the Dark Pharaoh expansion.

One of the chief problems with Arkham Horror is that it can take a large block of time to play. Last time we played it took us over four hours to win the game. This time we had a three and one-half hour block of time to play and we felt confident that the game would either end on time or it would end early with the great old one being victorious!

We could have just played the standard game without the expansion but we decided to go for broke and went with the version where you shuffle all of the cards together.

After three and one-half hours we called the game. We had sealed five gates and would have sealed the sixth one for the win but we did not have enough time left.

Here is a short list of the things we learned in our two player game:

1) When playing with only two players the outskirts often fill up and the terror track moves fairly fast.
2) Clue tokens can really build up at locations.
3) Those same clue tokens can quickly vanish if you don't seal gates!
4) Being delayed or lost in space and time has a much greater effect on the game when there are only two players.
5) The CotDP Mythos cards have a lot of "lingering" effects.
6) The exhibit items were interesting but not unbalancing.
7) Some of the other worlds cards are deadly as you may have to fight an elder god, on your own!
8) Seal every gate. The locations that were "stable" are no longer stable.

We had a good time playing but we did reach a point where we knew we would not lose and that did affect our game play.

Early on I had an opportunity to seal the Independence Square location but I held off thinking it to be a stable location, it wasn't as two more gates opened there during the course of the game!

I acquired an item that would allow me to gain sanity, health and clue tokens when other players died...

We had a few problems with powerful monsters roaming the streets of Arkham in gangs. It became a case of, "should I fight the Dhole or that grouping of a witch, vampire, elder thing and a hound?"

We did not draw any of the feared "put two tokens on the doom track" mythos cards but we did draw enough of the mythos cards targeting normally stable gate locations. There were also a few times where we would stay in a location that is normally unstable and not have gates open there, ever!

Dan was banned from one of the locations... shortly after he was banned clue tokens began to appear in that section of town!

I picked up a "local guide" card while in another world. The -1 to my movement became an issue as areas were just out of my reach!

We hope to play again soon with a bigger group. 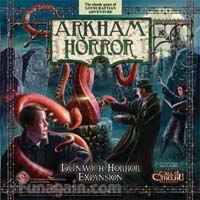 I have also heard that the Dunwhich Horror expansion is out.... I can't wait to get it!

You can buy these games directly from Funagain games.