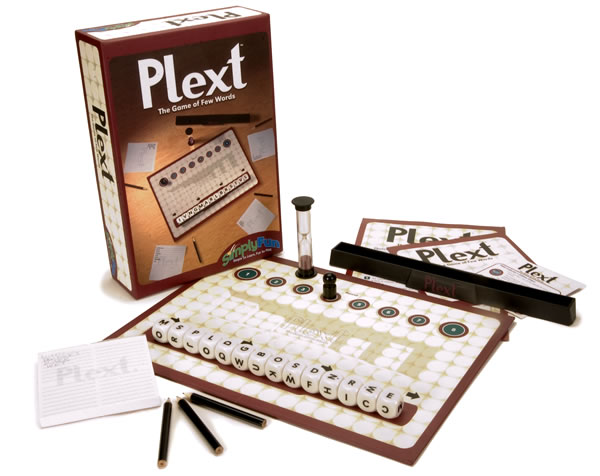 As soon as I saw Plext (SimplyFun, 2005 - Alvin Madden) and read the rules, I knew that my wife would enjoy it. Word games are fascinating to us as a couple, and ones that allow players to work with a set of letters, rather than be constrained by using solely the letters given with the game (like Scrabble) are more enjoyable to us than most. Plext comes with some fascinating components (although slightly flawed) and rewards creativity.

Plext is certainly for those who like word games. Although it allows some leeway with creating words and is easy and simple to play, the fact remains that word puzzle enthusiasts will probably do better than others. Still, there's enough open-endedness that normal folk like myself will have fun. The game isn't one that I think will see multiple replays, as I merely found it okay. Still, it's easy to play and looks nice on the table, so perhaps it will click for some folk.

A marker is placed on an eight space track on the board, to track each round of the game. Each player is given a pencil and paper, and the first round is ready to go. Fourteen letter dice are randomly rolled and placed in a special dice tray. The tray is then flipped onto the board, putting the letters in order. (An example would be "ESNLTJLYGMBOGM") All players then must quickly write a list of words that use all of the letters in the dice line, but they must use them in order. For example, the words "Personality", "Jelly", "Gumbo", and "Gem" would be a valid entry for the above letters. Players can add as many letters as they wish to form the words but cannot change the order of the letters in the word. As soon as one player has created a list of words and written them down, they call out the number of words in their list, which becomes their "bid", and flips over a minute timer. All the other players then have a chance to underbid this bid, stating the number of words that they have used.

After the timer runs out, the player with the lowest bid reads their word. If their words are correct (in order, spelled right, etc.), then that player wins points equal to ten minus the number of words they used. In my example above, I would have scored six points (10 - 4). If the player has made a mistake, then the next lowest bidding player can check their words and possibly score some points. Once one player has scored points, then the marker on the board is moved and another round begins with the dice re-rolled. After eight rounds players find the sum of their scores, and the player with the highest score is the winner!

1.) Components: Small pencils and a pad of line paper are included, which should last for several games (in my games, each player used only one sheet per game.) The timer is interesting, in that it has black sand rather than white, although ours was stuck a few times. The board is nice - if superfluous - it's only used to track which round players are on and form a convenient place to store the letters during each round. The dice tray itself is a nice design - a plastic container that flips all the dice over easily and without spilling them. The dice themselves I have a small problem with. Don't get me wrong - the quality of the dice, with nice rounded corners and easy to read bold font are great to handle and use. The problem is the orientation of the letters. When flipping the letters, it's easy to flip them so that all the letters are upside down, causing confusion over which way to read the letters. Worse, the "X", "S", "I', "H", and "O" are impossible to tell which orientation to place them in the tray, so some sorting must be done at the beginning of each round, throwing off the timing. This wasn't a huge problem in our games, but big enough so that all players agreed that it was annoying. Everything fits well in a plastic insert that is sturdy and impressive and holds everything tightly in a very sturdy medium-sized box.

2.) Rules: All SimplyFun games have a single page of "Quick" rules that quickly explain the rules. Plext is no exception to this, and the extra four pages of rules are almost simpler than the first page - just taking time to show examples and color pictures. The game is fairly simple to learn, but I usually have to show players an example for them to fully grasp how the game works.

3.) Words: My wife and I, when playing the game, usually end up with five or six words for each letter line; although we've had a few good ones (four!) and several poor ones (seven). It's more of a race to see who can do it first, I think. The timer/bidding mechanic is very similar to Ricochet Robot, in which players bid to see how few moves they can complete a puzzle. It works in this game but lacks a bit of the tension in Ricochet Robot - mostly because a minute is not enough time to come up with fewer words, and the player who first calls out a bid rarely makes a mistake - I have yet to see one in the games I've played.

4.) Word Power: People who have a larger vocabulary will probably do better in this game. However, and possibly more importantly, the ability to break the letters down into the correct groupings is also very important. Rather than sit there and puzzle out a word that has "X" first, then "Q", perhaps it would be beneficial for me to put them with the other adjacent letters in different words. Sometimes a word just jumps out at you, but other times you can puzzle over letters for a long time.

5.) Fun Factor: I like word games, and puzzles; and although I found my initial playing of Plext fun, the interest that I had for it quickly died down. The idea is neat - sure, but it just didn't mesh into a very fun game. My wife and I are fairly evenly matched when it comes to word games; but when playing with someone of a different level (whether higher or lower), the game just doesn't hold up. Plext is the kind of game that is only fun if you are winning.

Plext is only available from a SimplyFun representative, who can be contacted to throw a party in which they show of the SimplyFun games. Plext fits in the SimplyFun criteria, which is an easy to teach game that can play in a short time; and it's a word game, which may please Scrabble lovers. I just found the other games in the SimplyFun line more enjoyable - and found Plext only a passing fancy - a word game that was puzzling and interesting, but entirely forgettable.