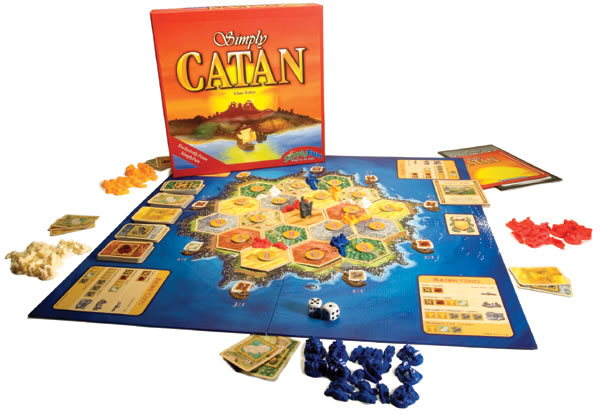 When I first heard about Simply Catan (SimplyFun Games, 2006 - Klaus Teuber), I had a hard time imagining how Settlers of Catan could get any simpler. Then I realized that I was a person who enjoyed Cities and Knights of Catan, + Seafarers + Fisherman + whatever latest flavor of the month was, and dropping all those condiments and playing "Vanilla" Settlers seemed simple to me. But there are many folk who still shy away from even what we consider the simplest of Eurogames and need something simple. Simply Catan, my friends, is an excellent choice in that regard.

First of all, many of you are probably wondering what the differences to regular Settlers of Catan are, currently produced by Mayfair Games. So, let's talk about 'em!

1.) Components: In my eyes, this is the biggest change, although it doesn't really change any of the rules. First of all, the SimplyFun version is absolutely incredible (don't worry, the price reflects this), and has some of the nicest components of any game I've seen. A large square board holds the hexagons together snugly in place, with almost no jiggling possible. The hexagons themselves do not come in singly, but come in five strips, one of five, two of four, and three of three hexes. This sounds like it limits the number of options, but the amount of ways that the board can be set up are still quite large, and the hexes will most likely be more evenly distributed in this version. The board also has the building costs of the different items printed on the four sides of the board, as well as ports placed at certain points, and spots to place the different stacks of cards. All in all, the board brings the entire Catan game together in a really nice way - and I might use it even when playing the original game. The cities and roads are very nice plastic molded pieces in blue, orange, red, and white - and look really good on the board, although some may yearn for the simplicity of the wooden pieces. Everything is coated in a linen finish from the box to the cards to the board - its incredible quality. The only thing of lower quality is the cardboard insert in the box, which seems to be falling apart as I type this, and I've been pretty gentle with the box. Still, it's a great package overall.

2.) Rules: A large square sheet that shows a basic setup is included with the game and lists eleven basic rules on how to play the game. An almanac is included with many clarifications on the rules, including the "advanced game". Let's clarify these differences:
- The basic game plays to seven victory points, the advanced to ten.
- The basic game has no development cards; the advanced adds them in, leading to
- The advanced game having the Largest Army card.
I found two other rule changes that the robber can be placed back onto the desert tile in the middle of a game, and that players can pick the starting city they get resources from - either of the first two they start with.

3.) Beginners: SimplyFun has certainly made a beginner-friendly game here. It really is easy to get into, it looks great on the table, and it takes less than hour to play. I found seven victory points a bit unsatisfying myself but found that many non-gamers really enjoyed the faster pace of that game. The "simplified" setup that the hexes appeared to be was really a straw man; and since the distribution is basically even, I actually prefer it.

I will not choose to play Simply Catan when with a group of gamers, I'd rather play the Mayfair version with Seafarers or Fisherman added in the mix. But for folks that I'm introducing games to, Simply Catan is a tremendously good choice. It's easy and tremendously simple, yet still retains the trading and strategies that make Settlers one of the greatest games of all time. The components are knock out gorgeous, and the game really makes a great gift. I came in, not knowing what to expect, and was rather impressed. Instead of becoming competition to the original Mayfair version, this one will point people towards it instead, hitting an entirely different market. What a wonderful occurrence!