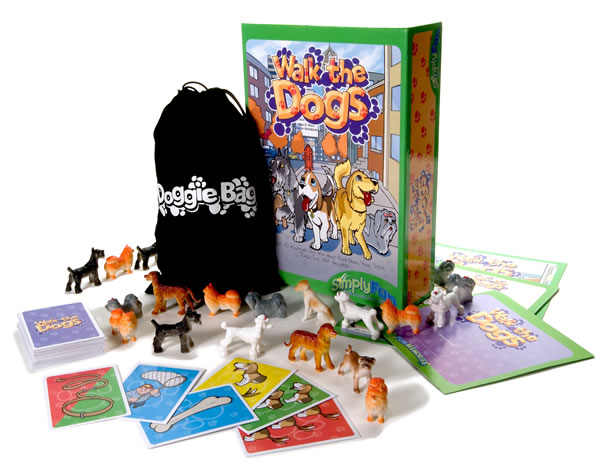 Of all the SimplyFun games, Walk the Dogs (Simply Fun, 2005 - Alan R. Moon and Aaron Weissblum) is certainly the most striking. The reason is simple - the game comes with sixty-three rubber dogs. The cries of "how cute!" and "Wow, look at the dogs!" ring out every time I bring the game to the table. And there's no denying that the dogs DO look good on the table and are attractive. But what about the game?

The game is a very simple one of set collecting (sets of dogs), with a small bit of "push your luck" involved. The game is probably too simple to please die hard gamers, but has worked well in every casual situation I've tried it in. I've played the game almost a dozen times since receiving it my very young children, with groups of adults, and with the teenagers that I teach. All of them have enthusiastically received it. Players have commented on how simple the game is, and some have determined that it's too simplistic for repeat plays, but those who enjoyed it and wanted to play again far outnumbered them. For me, it was a little too simple, but I enjoyed how easy it was to get folk to play it.

The sixty-three dogs are put into a bag and randomly drawn out, being placed in a winding line that goes around in the center of the table. There are seven different breeds of dogs - each easily distinguishable from each other. A pile of dog cards is shuffled, with two cards being dealt to each player, and the rest forming a deck in the middle of the table. The player whose name is closest to the letter "D" goes first, and then play proceeds clockwise around the table.

Each dog is worth points depending how many of the same breed is in a row (one dog = 1 point; two dogs = 4 points; three dogs = 9 points; four dogs = 16 points.) Bone cards give a player an additional three points. The player with the most points is the winner!

1.) Components: Okay, we all know by now that the game is defined by the very cool dogs that pile into the box. There are so many dogs that I have to move them around for quite a bit before I can get the lid back on! The bag included is a nice gesture; but the dogs barely fit into it, and we just randomly pull them out of the box lid instead. The cards are of utmost quality, coded by color and picture. The cards that allow a player to pull from the front of the line show the front half of a dog, the others show the rear end of a dog, tail wagging happily. These simple pictures mean that the game is accessible, even to young children. The dogs are painted so that they look semi-realisitc, and it's definitely one of those games where passerby will continually stop to see what's going on.

2.) Rules: The first page of the rules, as per all SimplyFun games, are a quick sheet of rules - and really, they're all you need to learn how to play the game. But even still, there are six more pages in the book with full color illustrations - easily teaching people the game. I have found no problems in teaching the game to anyone; my two daughters even understood the basic concepts of it, although the three year old didn't really understand it completely.

3.) Distribution: SimplyFun games are available through a representative who comes and throws a party (similar to Tupperware) at a house, selling the games that way. If you go to one of these (or host), which I highly recommend, I think that this is certainly one that will be there; and it's a great place to pick it up.

4.) Strategy: There isn't much to the game - other than take cards and play them. The only bit of choices a player has is where to put the dogs in their line. Attempting to get five dogs in a row is a bit risky; because if a player has four dogs at the end or beginning of their line, they run the risk of losing a lot of dogs to the dog catcher. Placing a dog in front of a line of three or four may keep the dogs safe but lessen your chances of winning. Really, it's not that big of a deal, and luck plays a much higher role in the game than one might think. If you get cards that allow you to capture three dogs each turn, you'll do better than someone who draws cards that allow them to take only one dog a turn - no matter how well they play.

5.) Fun Factor: This game has a high fun factor - mostly because it's quick, easy, and everyone likes playing with the dogs. In fact, if the game was horrible (which it isn't), I'd still hang onto it because I know that my daughters would enjoy using the little dogs as toys. I have enough time keeping people focused on the game when playing as it is, and I still don't understand the player who states that they are going to take a certain dog because they like the breed, rather than take the dog that will give them the most points. Still, as long as everyone's having fun - who cares?!

I would not bring out Walk the Dogs with a serious gaming group, unless I wanted to show them the cool dogs. The gameplay is simple and light, but it just doesn't hold enough for any serious strategy. But very few games have the same "wow" factor that this game does - whenever I open the box and show people the dogs, they have very pleasant and surprised reactions. If Walk the Dogs allows me to game with people because they think the components are cool, I'm willing to play a game this light. At least everyone's having fun.