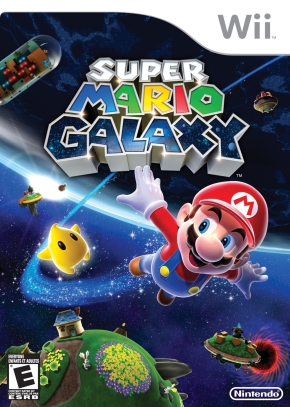 I know a lot of people on the Internet were gushing about this game even before it came out. Some reviewers were rating the game at an 11 on a 10 point scale. I'm not one for numbers myself and I write straight from the hip. Be prepared, this is not a game review from someone who accepts advertising dollars from the video game industry. Oh no, this review is from a man who plays video games when time allows and not for a living.

The first thing a lot of reviewers gushed on and on about was the graphics for this game. For some reason people seem to think that you can't do anything without 1080P graphics (or even 720P). Hey, that TV you've been watching since you cut your teeth on since Blues Clues is 420i. I still watch DVDs on my lame-old standard-def TV and I feel fine.

Why is everyone remarking on the graphics for this game as if they were somehow impossible to do on the Wii? Have you watched a single sporting event in the last five years on TV? Have you not noticed the CGI stuff they do?

I'm going to be totally honest and say that the graphics on this game are great, right up there with Metroid Prime 3: Corruption. Now, don't take that the wrong way. I have no problem with the graphic ability of the Wii in general I just happen to think that after this and Metroid, well, let's just say that the bar has been raised and I don't want to see a sea of polygons on anymore Wii games. 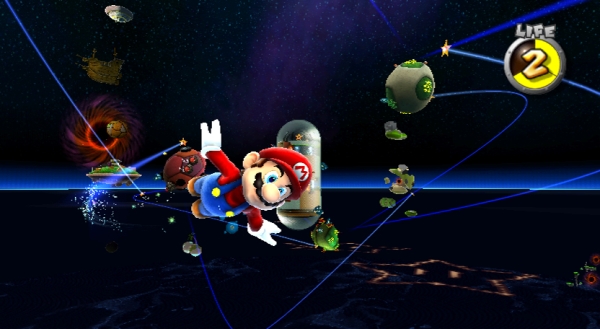 See that? It's Mario flying through the game. The little thing up in the upper right is his health and it defaults to three points. If you manage to find a red mushroom it can double up to six points, for a while at least.

Yes, it's the same old Mario storyline. Big bad Bowser has kidnapped Princess Peach and it is up to Mario to go out and save her. It's old too most Nintendo gamers but it's a comfortable old hat, not unlike the old Fedora worn by Indiana Jones. Yes it's old and crumpled but it fits so well.

No, not a Rabbid!
This time around Mario has been invited to join Princess Peach at the castle for the star festival. On his way there Bowser shows up in some flying ships and takes the castle with him. Mario tries to hang on but gets blasted away. When he awakens he finds himself on a strange planet with some annoying rabbits that just want to play hide-and-seek.

This small world introduces you to the basic control scheme that the game uses. You use the stick on the nunchuk to move around, the A button to jump and the B button to shoot star bits at enemies. You can also shake the Wiimote or nunchuk to do a spinning move. The spinning move can stun some enemies and allow you to jump a little bit higher.

Once you capture all three bunnies you will find out a little bit more of the game's storyline. it is at this point that you find out that Mario's goal is to collect a bunch of stars from different worlds galaxies. Galaxies which are accessed by jumping through paintings star gates that are all in one central location.

As you progress through the game more areas will become available to you to explore and you will begin getting mail from Princess Peach. Yes, that's right. The Princess, who is a prisoner of Bowser, has the ability to send you mail. Not just mail either as each letter includes five extra lives. Can you believe the Toad who gives you the letter actually asks you if you want the five lives now or if you want to get them some other time? How often do you ever pass up on extra lives? Sadly, when you save your game and stop playing all of those bonus lives vanish when you start the game up again. Don't worry about it, you are not likely to die in this game.

If you enjoyed Mario64 you are quite likely to enjoy this game. Most of the Galaxies take about five minutes (tops) to go through. Once you grab the star at the end (or one of the bonus stars) you will be transported back to the space station.

Look what followed me home. Can I keep him?

Not every Galaxy has a traditional boss battle at the end of it. Some Galaxies only have one star in them while others have five. Most multi-star Galaxies will have a bonus star hidden somewhere within them. There is also a special star that can only be found by beating the comet enhanced version of that galaxy.

Most of the galaxies are very easy to run through and grab the star at the end. In fact, do not expect to feel challenged until you have about 40 (or more) stars under your belt. Some of the boss critters show up more than once and the only difference the second (or third) time around is that they move a little faster and the terrain becomes a little bit less safe. The three count rule is in effect for most of the bosses in the game. What I mean by that is that they go through three stages of you kicking their butts. Each time you knock them down they come back a little bit tougher but the same strategy still works. 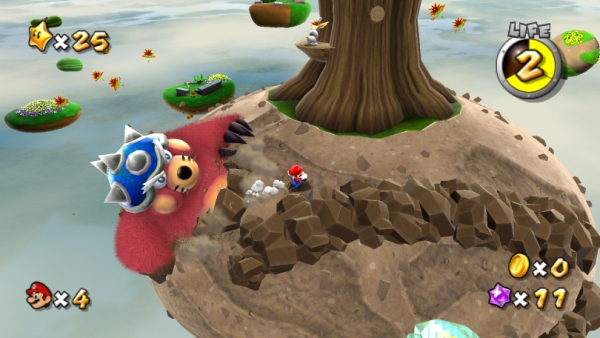 That's a mighty small rock for a gopher your size!

Taking down the bosses is relatively obvious as well. I don't think there was a single boss in the game that made me scratch my head and say, "how do I beat this guy?" I'm not saying some bosses were not hard to beat, it's just that the method to beat them was always obvious. putting that method into practice was not always so easy (just most of the time).

Most Mario games have taken the term two-player to mean one person plays while the other sits around waiting. This is not the case in this game. Having someone one a second Wiimote helping you out makes the game easier and more fun for you.

The secondary player has a few options open to them:

Granted they are not playing the part of Luigi to your Mario but not having to worry about pointing at star bits helps the A player focus on the game. Stunning fast moving enemies can also be a help at times. Odds are that you will not need that sort of help but having two peopl collecting star bits does make a difference.

OK, this is the one part of the game that makes certain parts of it annoying and almost unplayable.

I understand that this game fools around a lot with perspectives, gravity and the like but... This game is no fun when Mario ducks behind an obstruction, while walking on a narrow ledge, and you can't see him! In fact, the camera angles and the controls often work against you in this game.

For example, in most games if you push forward on the control stick you will go forward. Push right and you go right. This is not always the case in this game. in fact, due to the way the camera angles can suddenly shift on you (or not) pushing right can suddenly make you go forward instead of pushing forward!

Some galaxies also go from 3-D to 2-D in the middle of the galaxy. This can be very disorienting. What makes it worse is that when you go 2-D the controls act like a top-down isometric game even though it may still look like a 3-D platformer!

Another thing about the camera problems is that sometimes you jump and can't tell where you will land. It might even be a jump that only covers an inch of movement yet, due to the camera, you fall to your death! I understand the idea behind creating challenging levels but a level where I jump off of one block and the camera angle changes in the middle of my jump causing me to miss my landing platform and instead spiral my way to a grisly death inside a mini black hole is simply not my idea of challenging!

So, if you can't guess the camera angles on this game really annoy the hell out of me.

Should you get this game? That is a good question to ask. One has to wonder if one of the reasons Nintendo delayed the new Smash Bros. game is because they may have thought it would have a negative impact on sales of this game. It would have.

Super Mario Galaxy is not a bad game, it just has a few problems. It also one of your classic "play once" games. Much like Metroid Prime 3: Corruption and all of the Zelda games, this game suffers from a lack of replayabilty.

There, I said it, you are not likely to go back and play this game again after beating it. You might think, "it's a Mario game, I must own it," but you would be wrong. This game entered my house as a Christmas gift and i had no intention of buying it. Renting it, yes. Buying it, no!

There you have it. Not a game for the permanent collection but a fun game none the less. Rent this one if you can. If you have a sizable family you might want to purchase it as it has room for a lot of save files.