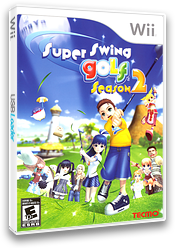 Unique multiplayer party mode games like Darts and Longest Drive are designed to get players together for fun, competitive golf without having to carry around a golf bag. In the single player tour mode, players compete against computer controlled rivals in matches across Pangya Island, where the golfing takes place. Successful play allows for the unlocking of unique costumes and items. Some costumes include those worn by classic Tecmo characters such as Mighty Bombjack and Rachel of Ninja Gaiden. Featuring eight playable characters, various selectable caddies, an abundance of collectable costumes and equipment Super Swing Golf Season 2 makes a great holiday gift.

"The holidays are a great time to be playing Super Swing Golf Season 2," says Yoh Watanabe, Tecmo's Marketing Manager. "Since families and friends are getting together, playing a game as fun and easy to get into as this one just makes sense."

Super Swing Golf Season 2 is rated E10+ (Everyone 10+) by the ESRB for Suggestive Themes and is available now for the Wii for a suggested retail price of $39.99.

I own the first Super Swing Golf game and have yet to complete the single player modes. All I can say is that I enjoy it.

Unlike some of the "pro" golf games the Super Swing golf (or Pangya) franchise is more about fun than realism. I happen to enjoy lining up my swing and using real golf motions to play the game. Unlike some Wii games you can not simply wiggle the Wii Remote and get a good result.

I also think the $39.99 price point is a good one for this game. I purchased my Super Swing Golf game for $25 when it was on sale.