Back on September 19, 2007 the Digg blog posted an article by Kevin Rose in which he told the Digg community that some changes were coming. These changes were going to be in the area of Digg profiles.

Later that same evening Digg went down for maintenance and when the site came back up more than just profiles were updated. So much more that many in the land of Digg cried out in anger and frustration.

Why were so many people upset over the changes at Digg? Let's take moment to read what was posted on the Digg blog prior to the upgrade:

We've completely revamped our profiles from the ground up - making it easy for you to share your favorite stories and discover new interesting content by seeing what your friends are digging. It's also even easier to find and add friends on Digg.


All of these will make it a lot easier to discover great content and share it with others. As part of this release, we have updated our Terms of Service and Privacy Policy, which we encourage you to also check out later tonight when the new features go live.

They did indeed upgrade the profile section. As for making it easier to game share your favorite stories, well let's just say that it is partially true.

Easier to find and add friends? Certainly! Digg finally removed the long-loathed "four at a time" rule on adding friends. Before the upgrade you could only add friends in groups of four two times an hour. This made it incredibly hard to add friends. With the new system in place you can add friends all you want, there is no restriction in place in regards to adding friends.

They also updated their TOS (Terms of Service) and some diggers cried out in alarm over that.

Of the coming attractions listed above Digg Images has been on the most requested list for as long as I have been a member of Digg. A new comment system would be nice, perhaps one that allowed me not to show comments at all to speed up load times? Digg Alerts and Story Suggest sound to be very similar. Digg Alerts is already partially in place in that you can have Digg email you when a variety of things happen (you get a shout, someone adds you as a friend, your submission becomes popular).

After these changes went into effect a number of "Top Diggers" and others began to opine on what they thought of the changes:

Opinions on the changes at Digg

Putting the Social back in social news

A common thread emerging is that Digg is turning into Facebook or MySpace (Of the two I would vote for MySpace, just read the Digg comments sometime). Some see this as good and some see it as bad. I see it as being part of the original vision of Digg.

Some people seem to forget that Digg started out as a Social Bookmarking site with a singular focus on tech and things that tech people like. Back in those days the comments were mostly good and you could get into a spirited debate with someone and shake hands afterwards. A lot of things changed when they added new categories.

Because of Digg's roots in the social side of things I see Digg's move towards becoming more of a social site as a good thing. Once the things promised come to pass we will all look back at this bumpy period and laugh. That's all this is right now, a bumpy patch in the road.

What have you done with my friends?

One of the big changes, that annoys the most heavy users of Digg, has to be the reworking of the friend's activity areas of the site. In the past you could go to a page that would list all of the recent activities of your friends. You could see what stories they submitted, dugg and commented on. This was great and extremely useful but it also lead to the gaming of Digg. All you had to do was look at all the submissions of your friends and digg all of their stories in a matter of minutes. Some think the changes in the system were implemented to combat this while some others think it is just an attempt on Digg's part to inflate their page view metric.

The new system still shows you a list of all of your friend's activities broken down in the same formats as before but now Digg has removed the ability to digg a story from that grouped view. Not only that but they have also removed the URL information and story synopsis from the friends area. This forces you to "click through" to each story's own Digg page in order to find out the synopsis and URL of the story. Only once you click through to the story page can you digg the article. This is why some people think this is an attempt to inflate Digg's page view metric as it forces Digg's most active users to view more pages than they ever had to do before.

Old way: Digg up to ten stories from a single page.
New way: View up to two pages to digg a single story.

I have to admit this change also makes blind digging more difficult to do but there are ways around it. What makes one wonder if this change is being targeted at the most active users is the fact that the general "upcoming" news pages still show all of the information that the friend's activity page used to show. It is not that hard to use the upcoming pages to do the same sort of blind digging due to the fact that friend stories will have the green sash on the Digg button. The other option is to bookmark a friend's submission RSS feed and have it open up all entries in their own tab. This is a very slow process and even on my machine with 2GB of RAM Firefox slows down to a crawl for three minutes while loading all those tabs. After loading you will have every story in their feed open on your browser.

Can you hear me now?

Another much talked about addition to Digg is the site-wide IM or message system. This has caused some controversy because one of the founders of Pownce complained when Digg used her list of genders on the new Digg profile page. Why do I bring up Pownce? I bring it up for the same reason TechCrunch brought it up. Both Digg and Pownce are Kevin Rose projects and it looks like Digg is sucking the soul out of Pownce and grafting it into Digg.

This messaging system is referred to as Shouts and you shout messages back and forth across Digg. For those worried about users being spammed their is an option in your user profile to turn off shouts or at least limit them to people you are friends with.

Psst. Hey buddy can you spare a digg?

Along with shouting comes sharing. Sharing is a form of shout where you attach a Digg story and beg ask for a digg. Some people thought this might be abused by folks with a lot of friends but it can't be abused because it does not work if you have friends! 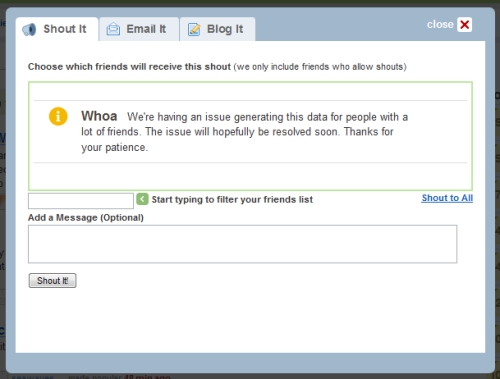 Granted I have about 200 friends on Digg and I am in the Top 200 of diggers (stories promoted list) but how many friends is too many friends? I have received some of these friend shouts and promptly deleted them and removed the friending if the shared article was junk.


As an aside. For those who worry about being profiled as a spammer or getting on an auto-bury list I'd like to remind you of something. Kevin Rose has long been talking of the day when Digg's association engine is complete and Digg will be able to suggest stories that Digg thinks you might like based on your previous digging history. Don't be surprised if Digg suggest spammy articles to you if you have been digging spam all along! It's not like you have not been warned, ya' know?


I think I have gone on long enough. It's time for me to give you the short and sweet of things.