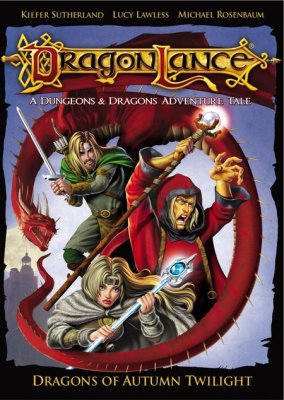 >A few years ago someone finally made a Dungeons and Dragons movie. It was bad. A little while later someone made a sequel to that movie. It was so bad only one actor returned. I knew those movies would be bad but I hoped they would be bad in a good way. When I heard the man behind the first movie talking about how dwarves live in garbage pits and are dirty and stinky I knew there was no reason to see the movie in theatres.

I found that the long talked about Dragonlance movie was finally released. Because they managed to land Keifer Sutherland (Raistlin) and Lucy Lawless (Goldmoon) I had some high hopes for the movie. Yeah, they were dashed on the rocks of my bittersweet memories of this series.

Back when I was in high school I read all of the Dragonlance books. I even read some of the fluff ones that were not written by Tracy or Laura Hickman. I even bought some of the hardcover versions of the books. These are not Lord of the Rings quality but, too a high school gamer, these were far more accessible and easy to read and follow. I have since read the books again (I have a lot of down time at work) and I have to admit that the core books do hold up well, the side books do not.

At any rate, a few days ago the DVD arrived in the mail (Netflix

again) and I eagerly put it in my DVD player while my wife looked on, wondering what sort of torture I was going to put her through for the next 90 minutes.

The opening credits were pure fan service. A CGI dragon was flying around only to be pierced by a dragonlance. Then it went to 2D animation and it all went to hell.

The story opens with the friends meeting up at the Inn of the Last Home in Solace where we find the town overrun by goblins. It is at this point that I turned to my wife and said, "this is going to be bad." I admitted it up front because looking at the horrible animation (it reminded me of the animation from the movie Heavy Metal but in a bad way). The animation only got worse because some of the creatures were animated via CGI and just dropped on top of the drawn animation.

Outside of town we have our first fight scene as Tanis and Flint are attacked by some goblins. They win but the battle animation was terrible and it seemed as if the artists were not sure whether they wanted to show blood or not. One minute a goblin collapses into a pool of blood and the next minute Tanis is removing his sword from a dead goblin to find it perfectly clean. There was no blood shed during the battle only pools of it after creatures died.

Once we finally get to the inn we have a few minutes of fan service but the worst thing has to be that when the movie would introduce a new female character they would zoom in on the character's breasts and then pan up to her face. When Tiki was introduced we get a couple seconds of her breasts bouncing their way towards us before we see her face. This was followed by a close up of her ass jiggling as she walked away. Yeah, I was feeling a bit embarrassed at this point.

As the movie trudges on it hops, skips and jumps over the journey and only focuses on the destinations. The journey through Darken Wood and the way to Xak Tsaroth are all glossed over. One minute they are in Solace and a few minutes later they have arrived at their destination. We never learn anything about the characters (yes, this movie was written strictly for existing fans and not to draw in new fans) nor do we even care about the characters.

Eventually I got used to the bad animation but the butchering of the book was just too much for me to deal with. By the end of the movie I was happy to see it end.

How could this accident have been avoided

If you are a fan of the books DO NOT see this movie. It is bad. It is real bad. If you do decide to rent it, watch it in private. DO NOT invite your friends over to watch it as they will wonder what the hell you are doing.

If you want to have a fun night rent it and watch it strictly with your gaming buddies. Spend the evening taking shots whenever there is a close-up of a female character's breasts or ass and see who gets drunk first.