Last night a story on hmtk.com made the front page of Digg. This story was written by my friend Force Drainer and it is called 501st Legion Inducts Kevin Smith as "friend".

The story made it to the front page of Digg just a few minutes before midnight on Monday March 5th. Upon reaching the front page the blog received a massive amount of traffic and collapsed. Duggmirror was able to cache the content so people were still able to read the story.

Over the course of the AM hours the story began to draw less and less traffic until 5:00AM EST time when it began to build back up again. This lasted until a little after 10:00AM EST when the story was buried.

I have to wonder how much higher that traffic graph would have grown if the story was not buried when lunch time hit on the East Coast. The fact that a Digg story brought in almost 15K hits between the hours of midnight and 10:00AM is telling enough of the power of Digg.

As you can see from the traffic chart the story was on a tremendous traffic rise until it got buried. Once a story is buried it not only falls off of the front page of Digg but it also falls off of the sub-category pages and it is removed from the popular archive.

The story had a good run while it lasted and I'm surprised it wasn't buried as soon as it was submitted (as so many things from blogs are these days). 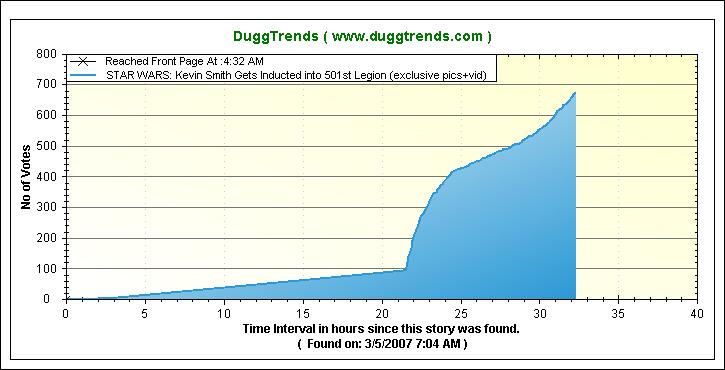 If you look at the image on the right (click to see the full sized image) you can see how the story took a very long time to grow, 22 hours before it hit.

To be honest I am a bit surprised it was buried after making the front page. It features Star Wars and Kevin Smith (Silent Bob) not to mention Stan Lee (you know, the comic book guy) this is the kind of thing most geeks are into, at least most geeks I know.

UPDATE
Something strange is going on. This afternoon, near 2:15PM EST, I started seeing hits from Digg that would indicate the story was no longer buried i.e. digg.com/news/page# links. Is it posible that the new changes at Digg allow for stories to be unburied if enough Diggs come in?

Also, just about the time the story fell off the homepage their was a suspicious referrer in my logs from a http://digg3.crawl.internal/offbeat_news/STAR_WARS_Kevin_Smith_Gets_Inducted_into_501st_Legion_exclusive_pics_vid/... Something smells fishy to me!