As you all know I moved nearly all of my Pokemon content to a new site called PokeFarm on Aug 3, 2007. Some of you may have also noticed the drop in traffic HMTK.com sustained because of the content move. I have no doubt that the traffic levels here will rise again just as they have done before but what I wanted to share with you today is the growing nature of the new site.

This data shows the overall traffic for the new site. Even though the hits are high the visits are low. Take a quick look at the amount of bandwidth the site is consuming as well. You can't trust the hits number because it also includes bot traffic. Let's delve a little bit deeper. 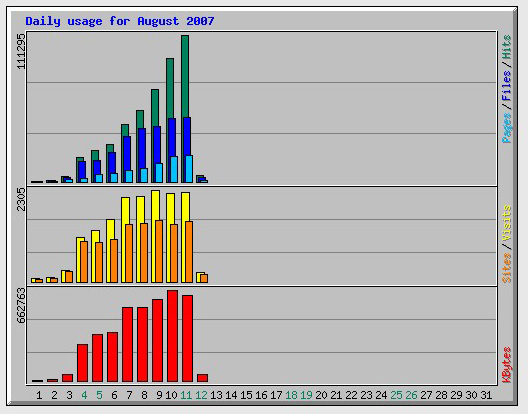 This graph shows daily usage of the site. Notice the unstoppable upward movement? Indeed PokeFarm is a website in growth mode. Do you know why it is in growth mode? I'll answer that question at the end of the article. 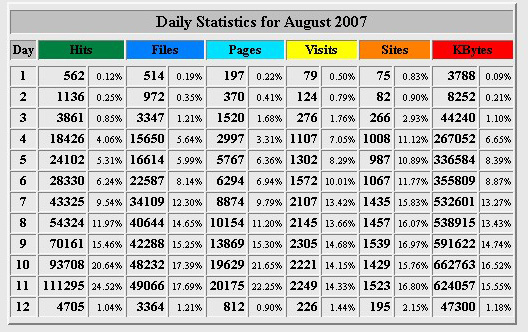 Now we have our daily breakdown chart. Here you can see the raw numbers for each of the data fields. You might be wondering why the last day has such low numbers, the reason for this is that the report is generated early in the morning and not at the end of the day so the day's traffic is not accurately counted.

Wondering about why PokeFarm is seeing such insane growth? There are two reasons:

When you launch a new website it is always good to look at the niche you intend to fill. Even though there are tons of Pokemon sites on the net PokeFarm fills a new niche that did not exist with the earlier games. By adding Internet trading to the new games Nintendo has created a new niche for Pokemon. We jumped on it first and we provide a great service. We also have a great domain name.