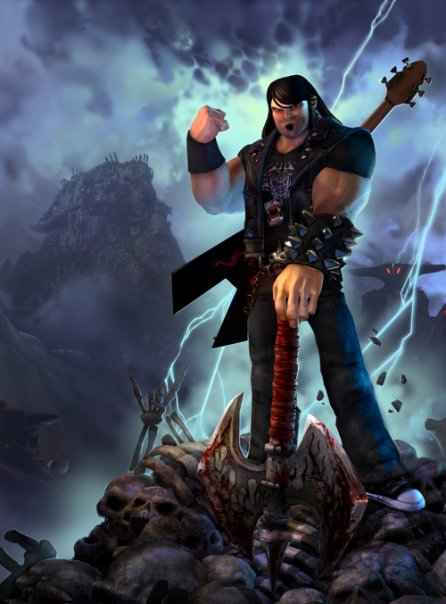 If you didn't make the Sign of the Hammer the moment you read “True Metal”, chances are you're one of the many people who will see Brutal Legend for what the rest of the world sees it as: a really cool metal game. But for those of you metalheads, punks and freaks out there who understand what True Metal means, Brutal Legend is more than a game – it's a friggin' tribute to all things metal. Nay, it is a temple of worship to the eldritch deities of rock. Those mofos at Double Fine know their metal. The vibe is perfect in this demo. At no time does it NOT look like a Dio or Iron Maiden album cover. Hell, even the girl is metal chick perfection.

Jack Black is a metal advocate of a sorts. The man loves old school metal and thrash, and coupled with his ability to weave a believable tale (when it comes to his own music), we have him delivering very authentic dialogue for Eddie, the main character in Brutal Legend. Of course, it's a bit hard not to see the main character as Jack Black himself. But whatever.

But holy shit is this game a worthy recognition to the epic awesomeness of metal. I got a huge kick out of the slap in the face towards the “metal” bands of today (and I use the term “metal” lightly here). Brutal Legend is a celebration of the heyday of metal, when long hair, leather jackets, and band T's were the chosen uniform of the world's disenfranchised youth. As one of those people, I was slapped in the face with an epic dose of nostalgia and excitement the more I played the game and this was only the demo! I'm thinking the full game is going to unleash Ragnarok the day it comes out, and the end times will be heralded in with an ear-shattering guitar solo.

Skulls? Check. Demons? Check. Mean cars? Check. The list goes on and on, but Double Fine did its homework on what's considered worthy of an Ozzy album cover, what objects you might find on a Slayer set, and they put it in the game.

I could talk about how smooth the combat felt or how the car's driving controls were better than GTA IV's. I could wax on about the smooth cartoon graphics and impressive animations, but screw that noise. Steve hit it before me and I don't like sloppy seconds. All I'm saying is this: Brutal Legend is the gaming world's nod to that dragon and denim loving subculture we all know as True Metal. And to prove that it's True Metal, it even has two Manowar songs on the soundtrack.

So ride forth oh horsemen of metal and strike fear into the hearts of your foes... um... by sitting in your basement and playing Brutal Legend. Okay, so you'll probably only scare your mom. But still.