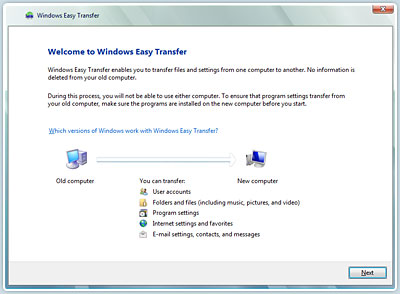 I know many of you are wondering how our first day with Vista went, well, it was not so good. The computers themselves are good and Vista on it's own looks nice but we needed something done right away; we needed our files.

Because we have a 100Mb home network I did not buy the overpriced USB-to-USB cable that they try to sell you at the computer store. I knew that I had plenty of bandwidth on the network to transfer my files. Besides, our old machines are USB 1.0 so I would not get nearly the throughput with that USB cable.

After getting the new machines on the network (and figuring out where MS hid the network options) I downloaded the transfer software to one of our USB thumb drives. After writing down the secret transfer code I ran the program on my wife's old machine and new.

The machines began transferring the files and account settings and all appeared good. When it was done most of her things worked but some did not.

What did not work? Her email.

My wife uses Outlook Express for her email. She was a bit shocked to find that now she will be using Microsoft Mail instead. the mail program setup was very quick but something felt wrong. All of her IE bookmarks transferred fine so why not the email?

We tried to do an import but the new mail program said there was nothing to import. We tried to look around the hard drive for the mail files from her Outlook but either we could not figure out where Vista put them or they did not transfer.

After looking online for a bit we discovered that we will have to hook up her old PC (again) and do an export of the data and move it manually. This is a super pain because her mailbox files are liable to be over 1GB and we only have a 1GB thumb drive. What about the network you say? I was never able to get the Vista PCs to see the shared drives on the XP PCs. With a little more time I might be able to figure out this problem but time is one thing I have in short supply. She fiddled with her PC for the rest of the night while I began the transfer process on mine.

Mine did not go nearly as smoothly as hers. In fact mine crashed half-way through and had to be restarted from the beginning. This means I now have about 15GB worth of files on my notebook named filename(1).extension. I'll have to do a search for files with (1) in them and do some deleting.

The problem I now have is that most of my software is non-Microsoft software. This means the settings for those programs did not transfer over.

I know my email client has a ton of stuff in it, well over 3,000 emails are sitting in there (I try to trim them but more come every day!) and since I can't connect to that machine over the network I do not know how I will transfer those messages.

What I found most annoying about the file transfer wizard is that it did not do what it would say. I saved the My Documents folder on my E drive. After moving it was not found directly off of C: but was instead hidden in the User area. I was hoping the transfer agent would transfer everything so I could put those old computers away and get some work done.

Tonight I will be doing the export/import work for my wife's email system. Stay tuned because i will be reporting on how that goes!