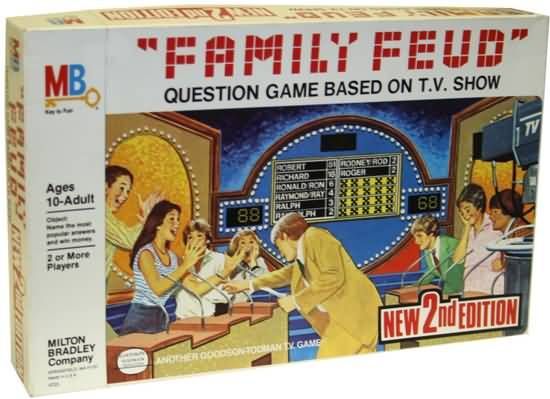 If there is one trivia game that hits the nostalgic nerve in me, it has to be Family Feud. I don't mean the TV game show that is still airing today. I mean the plastic and cardboard contraption that was produced in the 1970's based on the TV game show. That's right, I found a near mint copy of the second edition of this classic family game!

You may not be able to believe this but, Family Feud was the third of four awesome finds at the thrift store, all on the same day. When I say it was a find, I mean it was a serious find. Only one or two of the answers sheets had been folded and most of the answer sheets were still had their perforations intact. The plastic and cardboard structure was also in mint condition.

I will start out by admitting that while the paper money was in the box, there was no way we were going to be using it. A pad of paper and a pencil tends to be a more efficient way to keep score. While I thought I remembered how to play the game, the Avalon Hill-esque rules quickly showed me otherwise. I say that lovingly, Avalon Hill always made in depth rule books, with so much depth, you could quickly drown in them!

Our first game started out well. The board was quickly constructed. The answer sheet was inserted. The blanks were revealed... Then it hit us...

This game was made in 1977, and it showed. What I mean by that is the questions, they were clearly answered by people who were probably in their thirties back in 1975. People who would be in their 70's or even older today. Our kids didn't have a chance!

We did our best but questions like, "name an appliance that you can't live without," and, "name a famous American woman who was not a first lady," were way beyond our ability to correctly answer, given that a lot has changed since then. Even my wife and I (who were both alive in the 1970's) had trouble deducing what people would have answered 40+ years ago!

While we all had fun, it was clear that the original questions were locked in a time capsule that our kids could not open. As such, the game has been put back into the closet until we can find some updated survey sheets.

Now, I could have ended this post here but... While on vacation this summer we found a modern version of the game. It consisted of several hundred cards in a box. The questions were more timely than the 1977 edition but the nostalgia wasn't there. Much like the modern TV show, Steve Harvey is funny but Richard Dawson had a certain way with his lips that just can't be duplicated today. (For legal reasons.)