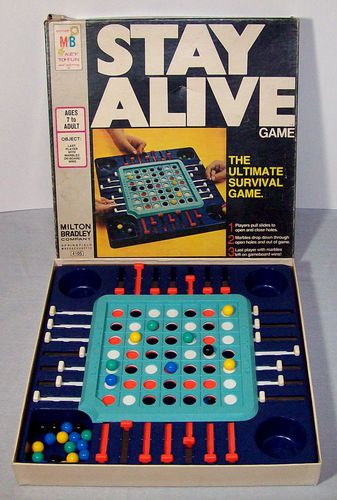 A couple of days ago I wrote about finding the board game Bonkers! at a local thrift store. Today I am going to tell you about one of the other amazing finds, Stay Alive.

Stay Alive is a four player game produced by Milton Bradley during the wonder years of American plastic board games. Many gems of this era are extremely hard to find and just as unlikely to ever be reproduced in their majestic glory. When I saw it on the shelf, with all of its marbles, for the low price of $2.99 I had no choice but to purchase it.

Yes, that is the grand master of horror himself, Vincent Price doing a commercial for a kids board game. There is another commercial featuring a group of kids on a beach but, that one is not nearly as cool.

At any rate I picked it up at the same thrift store as I found Bonkers! with plans to put it on the table as soon as we returned home that day. While I did acquire a couple more games on that day you are going to have to wait to find out what those games are.

Setting up the game was an easy matter of removing the marbles and randomizing the sliders. The red and white sliders are perpendicular to each other and have holes randomly drilled into them. When the hole in the white and red sliders match, the ball drops. You can always see where the holes are on the white sliders (they are on top) but keeping track of the red ones requires a bit of memory. When the last of your marbles drops, you are out.

Aside from a small disagreement as to who would get to play as a particular color we were into our first game. We also had one slight 'learning exercise' where one of the kids didn't understand that moving a slide 'one space' meant stopping in the middle and not doing a double move.

Overall fun was had by all. There were a lot of laughs when someone would accidentally drop one of their own marbles when aiming for someone else. The game plays fast enough that any hurt feelings are quickly reset when the next game starts. We also had a few instances of a player forgetting which color they were playing as (common when most people play the same color across multiple games and find themselves unable to now play that color) and sinking their own pieces on purpose.

In the end I would have to say that Stay Alive is a fun game that holds up well 40 years later. Modern kids can enjoy it and the game plays quick enough that it works great as a pick up game or time filler.