I recently upgraded my cell phone to one that includes a built-in camera. Because of this I have been able to shoot pictures just about all the time.

I present to you my week in pictures: This is my cat Kiko, sitting on the kitchen table. He knows he is not allowed to sit up there but since when do cats ever listen?

It is not uncommon to find him staring out of a window or curled up sleeping in a papasan chair. He's a rather noisy cat and has no problem making his opinions known when you do something he does not like. His brother Koko is not nearly as loud or boisterous.

All in all he's a good cat. 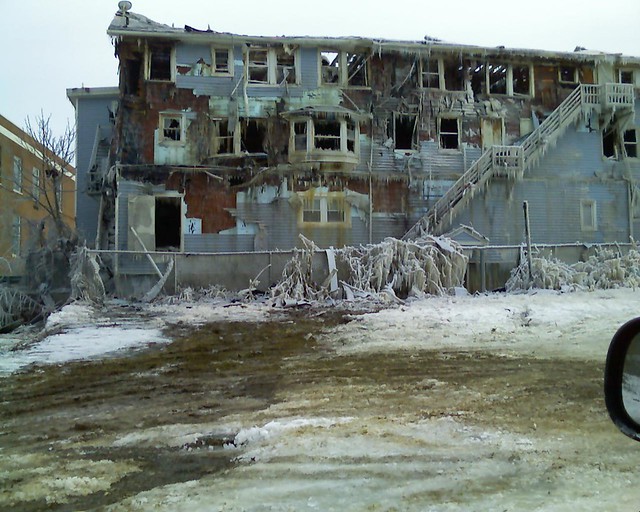 I took this picture last Saturday outside of my office. The building next door burnt down the previous night and the firetrucks were there most of the day. I had to call the grounds people to come and sand the parking lot because it was nothing but six inches of solid ice from the fire hoses!

As far as I know no one was injured in the fire but there were at least ten apartments inside that building.

I saw some news crews in the area while I was working but I did not venture outside to talk to anyone. I was driving the other day when I saw this car pull out of a side street. I waited until we both came to a red light to quickly snap this picture.

Who knew there was a car driving around with a big can of Red Bull on the back? Not me!

I was tempted to follow them when they went down another side street to get a shot of the side of the car (and ask for free samples) but it was not meant to be.